Kiefer Sutherland’s found himself on the wrong side of the law… in film. The actor has joined the cast of Paul W.S. Anderson’s Pompeii as a scheming senator. Jack Bauer’s gone bad. 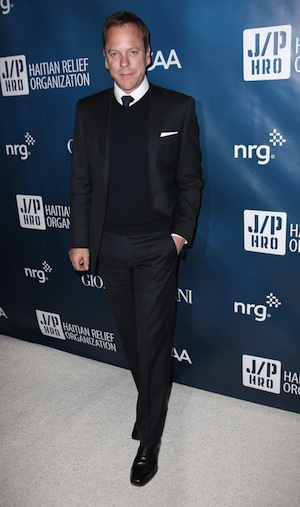 Kiefer Sutherland is returning to the big screen. During the past decade, he’s spent most of his time working in television. He played the iconic Jack Bauer on Fox’s 24, and now Martin Bohm on Touch. With his latest gig, he’s going from celebrated hero to feared villain.

It’s a period piece that takes place in 79 A.D., days before one of the world’s biggest disasters. Harington plays “a slave stuck on a ship who must race against time to save his true love, his master’s daughter, as well as his best friend, a gladiator trapped in the coliseum when the destruction begins.”

Browning stars as Harington’s love interest, who’s forced into marriage by Sutherland’s Roman senator. Not only that but, his character’s responsible for enslaving Harington’s village. Harris plays Harington’s master, who is Browning’s father.

While Sutherland gets in character for Pompeii, we’re still desperately waiting for that 24 movie. Will Jack Bauer ever get one last hurrah? Fingers crossed.

Pompeii will be a 3D action flick directed by Paul W.S. Anderson. He is responsible for the long-running Resident Evil franchise. To date, the series includes five films with another on the way. Anderson also directed 2011’s ill-received Three Musketeers 3D.

What do you think of Sutherland’s new villainous role?