Rihanna just can’t catch a break. Her tour bus was stopped by customs agents who found drugs on board. But the singer wasn’t even there. 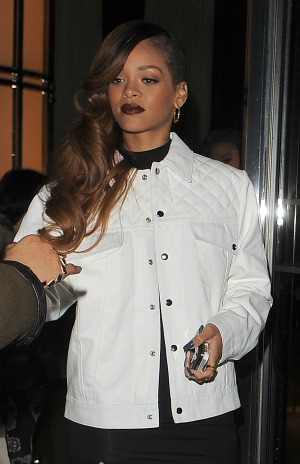 Rihanna just can’t seem to stay out of trouble lately, even when it is not her fault. The singer’s tour bus was stopped during her Diamonds World Tour, which happened to be traveling from Canada to Detroit, Michigan, this week.

The bus was reportedly stopped by a U.S. Border Patrol agent who said he smelled something “like weed” on the bus.

“At approximately 9 a.m. this morning, a caravan of 10 charter buses claiming association with the singer Rihanna attempted to cross in Detroit at the Ambassador Bridge,” Kris Grogan, with the U.S. Customs and Border Protection, told E! News. “During primary inspection a U.S. Customs and Border Protection (CBP) officer referred the buses for a secondary inspection due to the strong odor of marijuana emanating from one of the buses.”

Grogan said that they conducted a second inspection and a drug-sniffing dog alerted the officers there was a presence of drugs on one of the passengers.

“A search of the individual resulted in the discovery of a small amount of marijuana and civil penalty assessed,” he said.

Grogan made a point of saying that that passenger with the drugs was not Rihanna. In fact, the singer was not even traveling with the group.

After the stop, the buses were allowed to continue on their trip.

Rihanna’s world tour had her performing in Toronto Tuesday night and she will be in Detroit on Thursday. The singer ventured out on another world tour in 2012, when she invited 250 journalists with her as she performed in seven cities in seven days to promote her seventh album, Unapologetic.

The tour ended up making headlines for the wrong reasons though. There were transportation delays and Rihanna apparently didn’t show up for some of the promotional events on the tour.