The band has been off the grid for a few years, but will return in a big way on May 20 with their newest album. 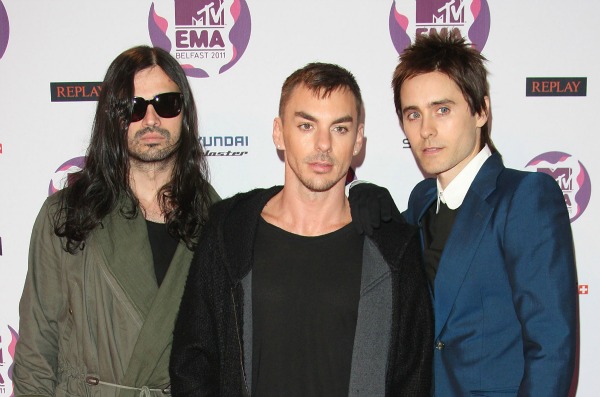 It was almost a year ago that Rolling Stone announced Thirty Seconds to Mars was in the studio recording a new album, Love Lust Faith + Dreams. On April 23, 2012, frontman Jared Leto spoke to the magazine to dispel any rumors the band was breaking up.

Matt and Kim on filming “It’s Alright” and their relationship >>

“We are excitedly working in the studio,” Leto said. “I have been working quietly and without much fanfare, but I’ve been writing and recording constantly, really crafting the future sound of Thirty Seconds to Mars.”

Now, almost a year later, it appears Love Lust Faith + Dreams finally has a release date. The band has announced that the album will be out in stores on May 20.

“This is more than an evolution, it’s a brand new beginning,” Leto said. “Creatively, we’ve gone to an entirely new place, which is exciting, unexpected, and incredibly inspiring.”

Leto co-produced the new album alongside legendary producer Steve Lillywhite and it looks like fans can expect a more mature band this time around. The band worked with Kanye West for a song on their last album, This Is War, and Leto said it opened them up to doing more collaborations in the future.

Travis Barker too scared to fly for Blink-182 tour >>

“Working with Kanye was the very first time that I ever invited an artist and worked with an artist on a Thirty Seconds to Mars song,” Leto told Rolling Stone. “That was really exciting and a really creative experience.”

He also spoke of some other artists he’d love to work with, including Björk, the Cure’s Robert Smith and Sigur Rós. And his wish list transcends all genres.

“I’d love to do something with Eminem. That would be pretty mind-blowing,” Leto said. “There are a lot of artists that I really admire out there.”

One collaboration the band did end up with on the new album was with M83 singer Morgan Kibby.

“She came by and was playing some synths and doing some programming,” says Leto. “She’s a real talent. We’re working with some interesting people.”

Thirty Seconds to Mars hits the road soon. They will be playing the Download Festival this summer along with Queens Of The Stone Age, Alice In Chains, Motorhead and others. After taking all of 2012 off from touring, the band is ready to get out and play for their (very patient) fans.

You can pre-order the album Love Lust Faith + Dreams now.