In the midst of opening his new club, Oliver’s old flame Helena (aka The Huntress) returns to wreak havoc on him and his family. 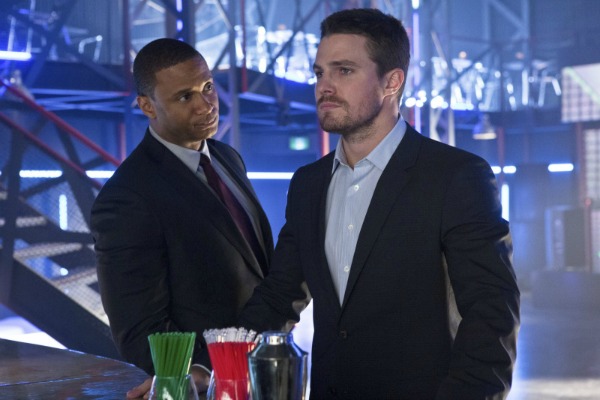 On this episode of Arrow called “The Huntress Returns,” Oliver (Stephen Amell) and Tommy’s (Colin Donnell) club is about to open and Oliver decides that maybe the bad guys should get the week off. Right then and there we knew that meant everything was about to go down the toilet and boy did it ever.

Poor Oliver had a lot on his plate in this episode, even more than normal it seemed. First there was the club opening, and then Helena (guest star Jessica De Gouw) comes back into town trying to find her dad after hearing that he’d cut a deal and the FBI was getting ready to move him to protective custody. She can’t handle something that big on her own and asks Oliver for help. He refuses of course, but she then uses the people he loves to manipulate him — first threatening his family and then capturing and hurting both Tommy and Felicity.

Diggle (David Ramsey) keeps telling Oliver that he should just end it once and for all and kill the witch, but Oliver is convinced she’s not a lost cause. She proves him wrong, but when he tries to finally take her out, it’s McKenna who gets hurt instead and has to go away to rehab for a year. It’s a situation that is made sadder by the fact that she and Oliver had just taken their relationship to the next level. But as Oliver sadly points out to Tommy (who happily seems to forgive his friend by the end of the episode), it doesn’t look like he can have it both ways — be happy and take out evil people in the world.

Meanwhile, Laurel’s (Katie Cassidy) dad, after a lot of resistance, finally agrees to hear what her mom has to say about the possibility of Sarah being alive. The picture she had could be of anyone — but come on, we all know she’s going to turn out to be alive, right?

Finally, back on the island in the past, Oliver and Slade see that Fyers has a missile launcher and they know that they need to stop whatever he’s planning. Wilson wants to blow the launcher but Ollie just wants to make it inoperable. Slade listens to his young apprentice and soon they are negotiating for a way off the island.

Wondering how in the world Helena rides that motorcycle in those boots.

Finding out that Oliver used to date Steve Aoki’s sister a million years ago.

Quentin’s reaction to seeing the picture of a girl that could be Sarah.

“I guess I will just have to be more persuasive, fortunately you have a family, too.” — Oh no, she didn’t!

Finding it interesting that Tommy called Oliver a murderer when Oliver had just told McKenna that murder was different than justice. I guess Tommy doesn’t see it that way.

“Wild guess, he’s planning on blowing something up.”

“What do you want me to do, kill her?”
“I think you would have a long time ago if she looked like me and not the T-Mobile girl.”

“You’re bleeding!”
“Yeah, that’s what happens when you get stabbed.”

Oliver warning Helena that if anyone else got hurt but her father, he was going to put an arrow into her. Is it wrong that I’m kind of with Diggle and wish he would do it anyway?

Just about having a heart attack when Helena said Oliver’s name. I know she didn’t reveal his secret, but still.

Oliver in the mask. That is all.

Yep, totally called that. I knew Thea was going to kiss Roy to keep his mind off the needle. You gotta admit that it worked.

“I feel like I’m letting everybody down.” — He looked so devastated when he said that. It made me want to hug him.

Tommy coming to the club to say he hadn’t realized how hard everything was on Oliver.

What did you think of this episode of Arrow? How did you feel about The Huntress getting away? Were you sad to see McKenna get shot and have to leave Oliver?