Michelle Shocked most certainly shocked fans with an anti-gay rant over the weekend, but could it all have been a misunderstanding? After two days of silence while controversy swirled, the singer has a few things to say. 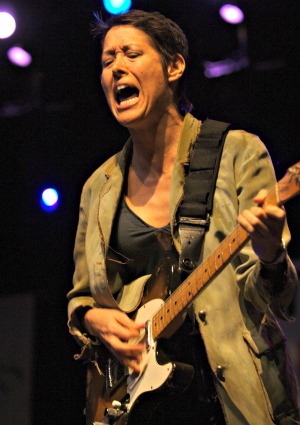 Michelle Shocked’s apology for anti-gay statements made at a San Francisco show has come in the form of an email. The message, sent to news outlets Wednesday, claims the controversy has all been a misunderstanding.

“I do not, nor have I ever, said or believed that God hates homosexuals (or anyone else). I said that some of His followers believe that,” Michelle Shocked explained.

The singer, who has asked fans at the San Francisco show to tweet that “Michelle Shocked says, ‘God hates faggots,'” explained of the odd request, “I was predicting the absurd way my description of, my apology for, the intolerant would no doubt be misinterpreted.”

The 51-year-old continued, “And to those fans who are disappointed… I’m very sorry: I don’t always express myself as clearly as I should. But don’t believe everything you read on Facebook or Twitter. My view of homosexuality has changed not one iota. I judge not. And my statement equating repeal of Prop 8 with the coming of the End Times was neither literal nor ironic: it was a description of how some folks — not me — feel about gay marriage.”

“I’d like to say this was a publicity stunt, but I’m really not that clever, and I’m definitely not that cynical,” the Soul of My Soul singer went on to say. “But I am damn sorry. If I could repeat the evening, I would make a clearer distinction between a set of beliefs I abhor and my human sympathy for the folks who hold them.”

Do you accept Michelle Shocked’s apology and explanation?