Shailene Woodley is everywhere these days. She’s gone from The Secret Life of the American Teenager to The Descendants, followed by The Amazing Spider-Man 2. Now she’s adding another title to her growing résumé. 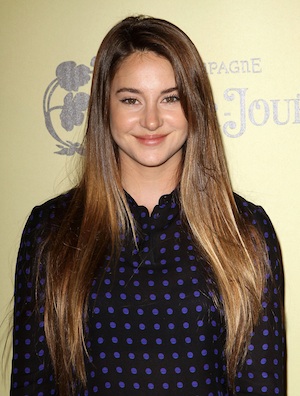 Shailene Woodley‘s career is on a roll. The young actress has landed the lead in The Fault in Our Stars. It’s the feature adaptation of the young adult novel of the same name. Woodley beat out countless actresses for the role of Hazel Grace Lancaster.

According to EW, director Josh Boone reveals that over 250 girls read for the part. He explained, “It wasn’t until Shailene stepped in front of the camera that I truly saw Hazel for the first time. It was like lightning striking. I can’t wait for the rest of the world to see what I have.”

It sounds like Woodley has the “it” factor. She’ll need every ounce of her talent to pull off this complicated story. The Fault in Our Stars centers on two teens who meet in a cancer support group and eventually fall in love. The book was originally published in 2012 and was written by John Green.

The author is overjoyed by the producers and director’s pick for Hazel. “I am absolutely thrilled that Shailene will be playing Hazel in The Fault in Our Stars,” Green says. “It means a lot to me that she is a fan of the book, and I know from our conversations that she has a profound understanding of Hazel. Watching her audition, I felt like Hazel Grace Lancaster was talking to me. It was eerie — and very exciting.”

The Fault in Our Stars could be a commercial hit for Woodley. If Twilight has taught us anything, it’s that teens love couples that are against all odds.

What do you think of Woodley as Hazel?