Octomom is being investigated for welfare fraud after raking in a huge amount of money last year through her adult entertainment activities. 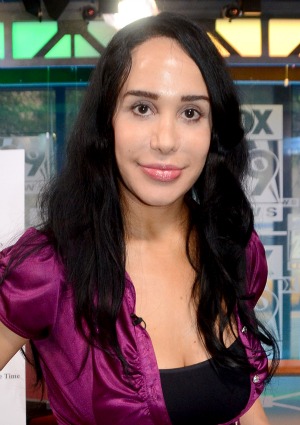 Octomom is being investigated for welfare fraud after a complaint was made that she raked in too much dough last year to qualify.

“I can confirm that the authorities have been in contact with us concerning her income and we have been cooperating,” an insider told E! News.

In addition to welfare, Octomom is also receiving food stamps to feed all those kids, reports TMZ.

Suleman was off welfare for a while, but went back on the dole after a 30-day stint in rehab for post-traumatic stress disorder. She told Oprah Winfrey, “I became beyond-beyond exhausted. I can’t tell you how exhausted. I actually was starting to crack. And then it got worse, the panic, all these panic attacks. So I asked for help and I call it a life rehab; I went to a treatment program for 30 days.”

If convicted, Suleman could face three years in jail. So who will take care of the kids then?

“Years after I had the babies — the octuplets — my manager and I collaborated together on doing an independent, um, self-pleasure video,” she said. “I did it obviously to provide for my family. But doing it, I don’t regret it. I actually, shockingly enough, it became one of the most liberating and empowering things I had ever done.”

Tell us: Should Octomom get welfare, regardless of her income?