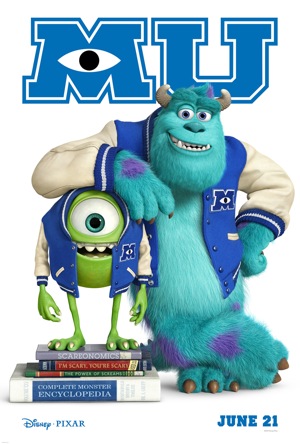 It’s been 12 years since Billy Crystal and John Goodman lent their voices to Monsters Inc. Now the monster duo takes us back in time to the blossoming friendship of their characters Mike Wazowski and James P. Sullivan’s in Disney Pixar’s latest movie Monsters University. The first prequel to a Pixar film, we learn in this movie that Mike and Sully didn’t start out as the closest of friends.

The Monsters University — A Message From the Dean trailer is a promotional introduction to the School of Scaring by Dean Hardscrabble who is voiced by Helen Mirren. Of course there is nothing scary about this trailer or movie. Although poorly advertised and cheesy videos promoting educational institutions can be scary, this clip is a sentimental portrayal of college that gives pause to reflect on the place where Mike and Sully first met. Similar to our colleges, MU encourages tradition and diversity, proving that sometimes the most unlikely friendships are the best of friendships.

Combining the perfect elements of entertainment, this animation, adventure and comedy would not be complete without Billy Crystal. Anything he is involved in is true entertainment. There’s nothing that he can’t do! John Goodman has had a good past few years. He’s been seen in a lot of well-known movies lately including Argo and Flight, as well as in the upcoming release of The Hangover Part III.

Where did you make your closest friends? Was it an unlikely friendship? Did you meet in college? Tell us how you you met and became friends with your besties.

Your future is knocking. Open the door to Monsters University in theaters June 21.