The creators of Revolution have released a series of prequel webisodes called Enemies of the State, following Captain Neville as he hunts down those betraying General Monroe. 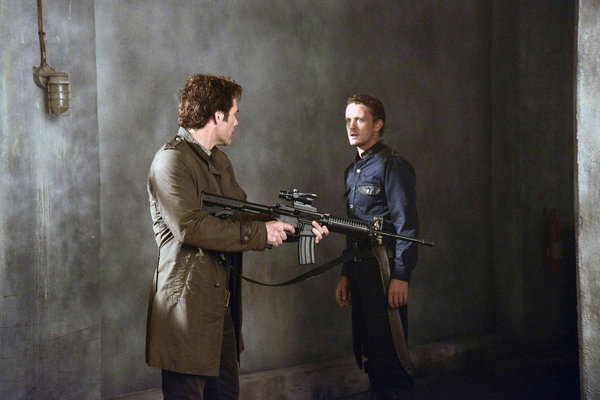 Enemies of the State sets us up for the return of Revolution on March 25. With all the action and suspense we’re used to from the show, we discover what happened after Miles broke into the Militia camp in the last episode.

General Monroe (David Lyons) knows Miles (Billy Burke) must have help inside the Militia in order to break inside. He sends Captain Tom Neville (Giancarlo Esposito) out to discover who was aiding Miles and get rid of them before the resistance can make any more moves.

Neville goes on a rampage

Neville compiles a list and goes after the men but is only able to apprehend one. Most of the others have fled the city. The one man Neville does find tells Neville that he helped Miles because Monroe has gone insane. The man says that he knows Monroe has been stockpiling weapons because Monroe thinks he can turn the power back on.

Neville doesn’t believe him, of course. The web series makes it even clearer than the show that Neville is willing to put all his blind faith in Monroe. Neville says himself that he’s worked too hard and given too many years not to advance within the Militia at any cost.

The web series ends with Neville reporting back to Monroe. Monroe wants to know if the man Neville apprehended gave an explanation for his actions against the Militia. Neville says the man has some crazy notion about Monroe turning the power back on. Neville promises to have the man hung for treason by morning.

Monroe challenges Neville again by saying, “But what if I am trying to turn the power back on, Tom?” The comment only confuses Neville before Monroe tells him to relax. Almost as if he was only joking.

Missed an episode of Revolution? Catch up with the recaps >>

Still, the comment catches Neville off guard enough that he investigates underground for these stockpiles of weapons Monroe is apparently collecting. He opens one of the hatch doors and his expression is confused. He says, “A woman?” before a man yanks him from the door and puts a knife to his neck.

So did Neville discover something that will make him believe Monroe really is crazy? I don’t think Neville is really a bad guy, which is the genius of the show. I think he’s just a man who was so desperate after the power went out he would have done anything to protect his family and his life. The Militia gave him that security, and he isn’t in any hurry to leave his bubble of comfort.

We’ll find out what’s next for Neville and the rest of the characters when Revolution returns March 25 on NBC.

In the meantime, watch the first Enemies of the States webisode below: