Several years after separating, there’s still bad blood between Kelsey Grammer and ex Camille. The latest salvo: She comes back to take the furniture. 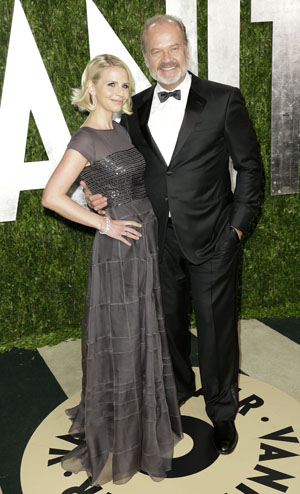 Camille Grammer to ex Kelsey and his new wife Kayte: Sleep on the couch.

The beleaguered Grammers divorced in 2011, but just settled their disputes over custody of kids Mason and Jude, three homes, and what the New York Post reports was $60 million in joint assets, in December.

The New York Post reports that “Kelsey blew a gasket” and was “yelling at the movers not to take the marital bed.”

Kelsey and his new family had briefly moved to Beverly Hills during the last of the divorce proceedings, and rented out the Holmby Hills joint for $30,000 a month, according to the Post. But they decamped back to Holmby when they decided the new place didn’t boast enough privacy.

Once they moved back in, Camille promptly demanded the furniture back so Kelsey and Kayte “wouldn’t be able to sleep in it,” sources told Page Six.

Camille told the Post that, “It was in the settlement that I got the bed. He got everything he wanted, the whole book collection. But he was living somewhere else. He didn’t want the bedroom furniture. He never liked the bed. He gave it up. It was really his oversight.”

Camille said about Kayte, whose affair with Kelsey broke up Camille and Kelsey’s 13-year marriage: “Wouldn’t she want her own furniture?”

Camille, who now lives in Malibu and has a big new canopy bed, told the Post she wouldn’t be using the bed she took back from Kelsey and Kayte until she moves to another house.

Kelsey’s people told the Post, “We don’t talk about what Camille does or doesn’t do. We all have better things to do.”

Nonetheless, he seems to enjoy trashing her on talk shows.