Changes have been made to Bombshell and Hit List left and right lately, but finally everyone has found their perfect role and the shows can go on… except for Liaisons. That’s a disaster. 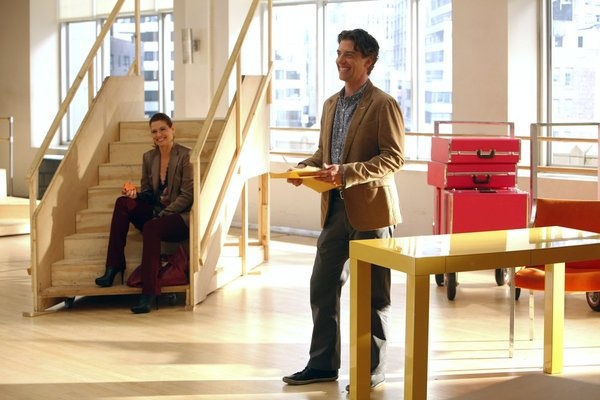 Ivy (Megan Hilty) and Terry (Sean Hayes) have been at each other’s throats for weeks now, especially since Ivy is so much better in Liaisons than he is. After a failed preview that left the audience in shock (and not the good kind), the dueling duo make a surprising agreement. If the show is going to fail anyway, why not have some fun with it and make it brilliantly bad. Alright, it was far from anything resembling the word brilliant, but they put a lot of effort in to make it bad. Terry slapped his costar’s breast numerous times and eventually closed the show by falling out of a chair. It was bad. And with that, the disaster that was Liaisons is over.

Karen (Katharine McPhee) also made a surprise — and possibly career ruining — decision. She’s been struggling with both her guilt over abandoning Hit List and with Tom being the new director of Bombshell and finally decided to make a decision. At the performance of Liaisons, Karen tells Tom that she’s not his Marilyn and Ivy is. Well, Tom would certainly agree. He’s been on Ivy’s side from day one. She is much more Marilyn-esque, but it’s hard to imagine that any girl desperate to work in New York City would simply give away the lead role in an upcoming Broadway smash. Hit List is definitely more of a risk. Either way, all the right people are now attached to the right shows, so maybe something will hit the stage soon?

Jimmy had to do some more rewriting to impress a creative director of a theater. He, of course, threw a fit about it, but Karen was there to calm him down. Together they presented the new song “Rewrite This Story” and it was a success, which means Hit List is moving forward and will have a place to perform.

There was also a tense moment when Derek (Jack Davenport) told Jimmy to back off Karen because she’s his. Well, he used the whole “I’m the director and she’s my leading lady” line and neither of them should be distracted by a third party right now. Super selfish move, but that’s Derek and our loyalties lie with him. He’s been here longer.