The CW’s hit series Arrow continues its gripping first season on Wednesday, March 20, with “The Huntress Returns”. In the episode, Oliver and Tommy are finally opening their club, Verdant, and are thrilled they are able to get Steve Aoki to play at the big event. 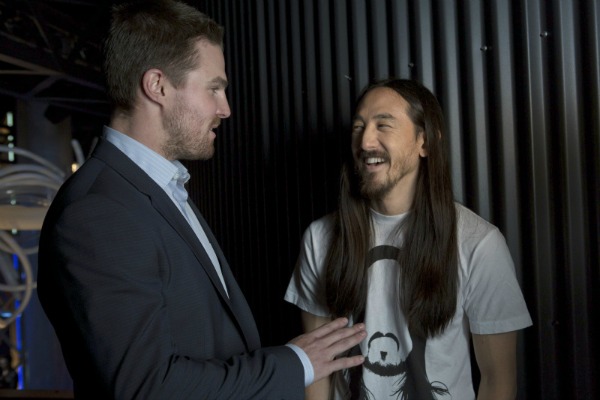 SheKnows got the chance to chat with music man Steve Aoki himself and hear firsthand what it was like to take part in the hit CW drama.

On how he got involved with Arrow

SheKnows: How did you get involved with the show?

Steve Aoki: They just hit up my team and it kind of just came in my direction, but when I found out about it I was really excited because I was already a fan of the show. I just wanted to make sure that I had time. That’s the hardest thing for me. I have one regret: There’s one movie that asked me to do a DJ scene and I couldn’t switch my schedule around to do it and I missed my opportunity to be in Tropic Thunder. I was like, “I can’t make that mistake again.”

On working with the cast and crew on the show

SK: What was it like working with the cast and crew of Arrow?

SA: I was really surprised how hospitable and really nice everyone was; just super-friendly and inviting me to hang out with them and get to know them personally. These are working actors who are doing all kinds of interesting things and there were a lot of connections being made in terms of music and our interests and stuff like that. It was a really great experience.

On filming the scenes in Oliver’s club

SK: Was it different to film the club scenes opposed to actually DJ-ing in a real club?

SA: It was definitely different, but I knew what I was getting myself into because I did something similar for a movie that I shot last year. So I knew about shooting the scene over and over again. I remember working with the crowd in front of me and thinking, “We’ve gotta change the vibe or else it won’t feel like the energy from one of my shows.” Plus my music is pretty intense, so it’s not like cocktail bar music. So I talked to everyone in the front and told them “you gotta get loose” and “throw your arms up, shout and scream if you want.” Being able to communicate with the extras in the crowd helped me a lot with making the vibe bigger.

SK: What was it like to have to film some of the club scenes in silence?

SA: It was a little funny when that happened, because there’s a scene where the music is actually playing; they have a pretty decent sound system in there so it was loud and it felt real. Then when they were shooting the talking parts obviously there’s no music, but you’re still kind of bouncing. I put music in my headphones so it was kind of easy for me. I just got into my own world and grooved. It was kind of funny; going back and forth with no music to blasting music and maintaining the vibe where the music was going.

On what songs will be used in the episode

SK: What songs did you use in the show and how did you choose them?

SA: They are two of my songs, called “Singularity” and “Transcend.” I wanted those songs to be in there because they’re my latest singles. They are definitely more underground than some of my other records, but they are brand-new songs of mine that I’ve been playing a lot. We actually just put them out two months ago so they are kind of fresh Aoki tracks.

On shooting behind-the-scenes footage from the episode

SK: Did you film any of your show On the Road with Steve Aoki footage while you were filming Arrow?

SA: Yes, we did. We did put the camera on me. They said the same thing: that they saw the On the Road with Steve Aoki stuff and really liked it. It was a little different though. My regular camera man — I’m practically married to the guy, so he’s with me all of the time. But this time we had these huge cameras with a guy I don’t know it, it was hard for me to do the same kind of word play with him, but we still made it happen and we made it pretty interesting. We did some interviews with like Oliver and I talking about the scene and the Huntress coming back into the story line, opening the brand-new club, and being there with the cast and crew.

Check out the behind-the-scenes video below:

Looks like fans are going to be in for a real treat when Arrow returns from its mini-hiatus. Are you excited to see the episode and hear the songs that Steve Aoki will be playing in the big nightclub scene?