Pretty Little Liars’ shocking Season 3 finale left us with so many lingering questions! Here’s a list of some of the questions that will eat away at us until Season 4. 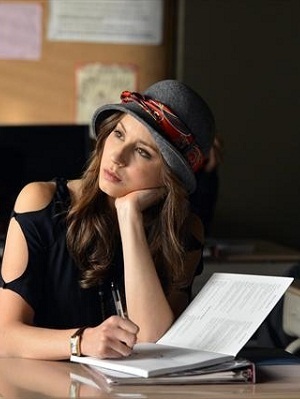 Pretty Little Liars dropped a lot of bombs on us in the Season 3 finale. There were things we kind of knew, like Shana and Jenna were up to no good with Detective Wilden. But then there were things we didn’t see coming, like Spencer betrayed her friends so she could be reunited with Toby. With all the mysteries and secrets that were revealed we were still left with a lot of lingering questions that will be sure to plague us until Season 4 premieres.

The mystery of the girl in the red coat:

Let’s start with this pesky red coat girl who seems to be wreaking a lot of havoc. Even Mona doesn’t know her real identity, but we now know that she’s the real leader. She approached Mona during her time in Radley, so does that mean she was a patient there too? Does she work there? Or did she just break in?

We also have to wonder if this is a character we’ve already been introduced to? Like Jenna or Shana? Or, better yet, Melissa? That Hastings definitely has a few secrets up her sleeve, but she doesn’t seem like she has enough energy to care about ruining so many people’s lives. It’s a full-time job, and Melissa just kinda sits around all day. Or leans on countertops. That’s about it. Or is it Ali?

Missed the finale? Here’s the recap! >>

Detective Wilden and his girls:

Wilden seems to definitely have a sketchy relationship with several of the young ladies around town. There was the rumor Ali was pregnant with his baby before she died. That’s probably not the case, but she was on his boat. Now he has Shana and Jenna saving him and keeping the secret after he got hit by the car. You have to wonder how they happened to be there just when he needed them? Do they follow him everywhere? Are they on his side or maybe blackmailing him? Either way it can’t be good and they are all hiding something. But, dude, seriously it’s weird that you have so many teenage girl friends.

We all believe that Toby did what he did to protect Spencer. He even went along with faking his own death so that “A” wouldn’t hurt her. Spencer wound up in a mental home over it so it seems like the damage was still done. But, what was he protecting her from? What else did “A” want to do to Spencer that Toby saved her from? How far is “A” willing to go? Where did Toby disappear to when he was supposed to be dead? Whose body did Spencer find in the woods? Could it be Jason’s? And finally, is “A” using Paige, Ezra and Caleb too or is Spencer the only lucky one whose love interest got recruited to the “A” team?

This is a never-ending lingering question, but I hope they tell us before the series finale! There have been so many clues along the way, but then immediately something happens to crush the idea. If she is alive then she is some kind of sneaky super hero. How does she manage to be in so many places at once? How could Spencer see her in the woods and then she immediately goes to rescue the girls from a burning house? Would she really be able to carry the girls out of the smoking house or did she have help? Where has she been hiding this whole time? Someone would have to be helping her, but who?

Is she “A”? Or is she actually really dead and the girls (and the audience) need to accept it?

Let’s not forget about the gasps heard around the world when the girls opened up Wilden’s trunk! What could have possibly been in there? Was it a body? Was it more creepy photographs and videos of Ali before she died? Was it the dress Ali was wearing the day she died? Maybe it was just dead fish and leaves. After all, it was just pulled out of the lake.

So many questions! But, that’s why we’re so hooked. It’s like Lost, except they actually give us answers we care about.

What are some of your lingering questions?