The Season 3 finale of Pretty Little Liars revealed shocking truths and left us with a cliffhanger we’ll be talking about for months! 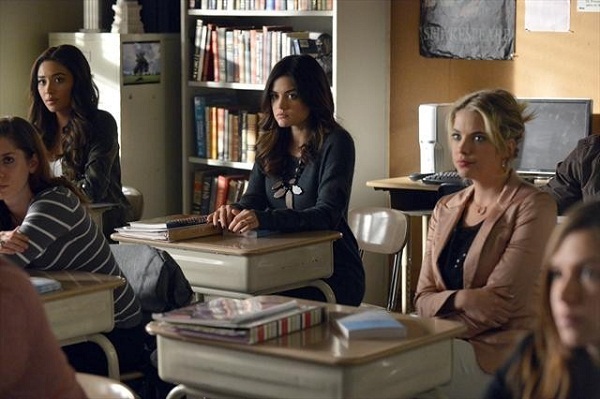 As promised, tonight’s season finale had no shortage of shocking bombshells. There have been many twists and turns during Season 3, all leading up to this week’s crazy reveals.

We all saw this one coming for a while, but did we really believe it would actually happen? Aria (Lucy Hale) and Ezra are done. Over. No, really, they officially broke up this time. Aria has been having such a difficult time adjusting to Ezra now being a father, which is understandable. She’s not even out of high school, she doesn’t need to worry about being a stepmom. They just couldn’t see eye to eye and Ezra suggested that she walk away. It was sad to see.

But these two won’t be apart for long. Ezra took a job at Aria’s school, so like it or not they will be seeing a lot of each other next season. That is bound to lead to awkward run-ins in the hallway.

Missed last week’s episode? Catch up before you read on! >>

Our biggest heartache this season came when Toby died. But, you can finally stop crying into your pillow at night. His dreamy eyes and washboard abs have returned. That’s right, he’s alive! And he doesn’t seem like such a villain after all. He meets Mona (Janel Parrish) at a diner and is shocked to discover Spencer (Troian Bellisario) is there in a red coat. He tells her everything he did was to protect her. We’d all really like to believe that, and so would she. She forgave him pretty quickly.

Spencer had a secret of her own to confess. Mona actually told her that Toby was alive while she was still in Radley and that was the whole reason she agreed to betray her friends. If she gave up the girls Mona would reunite her and Toby. So, it doesn’t seem like she’s exactly joined the “A” team, she’s a double agent with her own agenda in mind.

Emily (Shay Mitchell), Hannah (Ashley Benson), Aria and Mona get trapped in a burning house that leads to some answers and even more questions about the girl in the red coat. She is the leader. She is “A”. But not even Mona knows her true identity.

When the girls wake up safe from the fire, Mona and Hannah swear that it was Ali that rescued them. They both remember seeing her. But was it a shared illusion from all that smoke or is Ali really alive?

The cliffhanger ending reveals video footage of Jenna and Shana helping detective Wilden after he was hit by the car and Wilden’s car in the street. In the trunk “A” left the girls a present that made them all gasp, but we won’t know what it is until next season!

Hang in there, PLL fans, we only have a few months to go until our favorite show returns with more twists and turns (and hopefully more answers)!