Keyshia Cole numbers among the many who don’t like the thrust of Beyoncé’s new single “Bow Down/I Been On,” and she starts a Twitter fight to prove it. 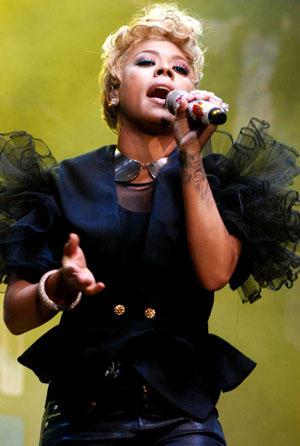 That was in her follow-up to an earlier tweet: “Can’t stand when people all self righteous when it’s convenient it makes them look good. Lmao! But still can talk s*** when convenient,” Cole fired at Blue Ivy’s mom after the release of her “Bow Down/I Been On.”

Cole might have a point there. Some of the “Bow Down” lyrics: “I know when you were little girls you dreamt of being in my world. Don’t forget it. Respect that. Bow down, bitches.”

Of course, these lyrics are nothing compared to some of the self-aggrandizing lyrics one hears in tunes from, say, Beyoncé’s hus-bear, Jay-Z, who’s rapped that he’s “Michael, Magic and Bird all rolled in one.”

“You need a hit record ASAP!! @KeyshiaCole u bored and angry,” tweeted one irritated fan, while another responded, “@KeyshiaCole what’s ironic is that you’ve been talking all that family 1st/God s*** for a minute, but then pull the same s***… lol.”

Another roped in another celeb known for Twitter fights: “Keyshia Cole and Chris Brown are two artists that really shouldn’t have twitter accounts.”

“Chicks stay shooting the s*** but when I speak my mind its a prob. #Well #StayMad,” Cole wrote.

Beyoncé’s well-known for her you-go-girl anthems, such as “Single Ladies” and “Run the World.” But some fans (and apparently, Keyshia Cole) find “Bow Down” to be anti-woman, with its frequent use of the b-word to describe women.

One listener tweeted, “The new Beyonce song is horrid. Unnecessary swearing, offensive misogynistic referencing of women, and terrible music and vocals. 0/1000.” Another would-be fan wrote, “how can u sing at the presidents inauguration then release this disgusting offensive song @beyonce?”

Beyoncé’s new album will be released in April.