Lisa Rinna reveals on Today that not only have her infamous lips gotten her a lot of attention, they also won her a bonus visit to the doctor to have hardening silicone removed. 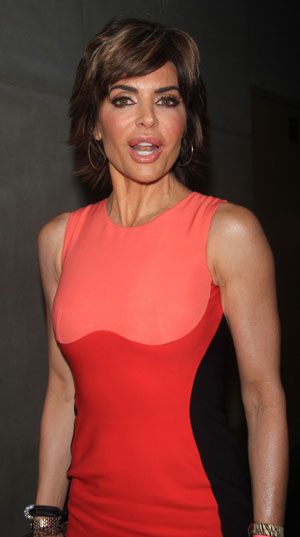 That’s what the 49-year-old actress revealed on Today Monday, when she sat in for host Kathie Lee Gifford.

Co-host Hoda Kotb turned to the Celebrity Apprentice star and said to her “Wait, can I ask about your lips?”

Rinna is probably pretty sick of talking about said famous pucker, but without heaving a deep sigh of ennui, somehow, she addressed them.

“Here’s the story: 25 years ago, I had my lips injected with silicone. Stupid thing to do at 24,” she admits.

“I saw Beaches,” she told Hoda.

So after Rinna saw Beaches and lusted after Hershey’s (overly) luscious lips, she ran right out with her best friend and they had their lips “done.”

Cut to several decades later when, after years of mockery and amazement, Rinna’s lips start to harden. This is a widely known side effect of silicone; silicone-enhanced breasts can gain a texture reminiscent of tennis balls or even sacks of concrete.

In fact, one of the most famous bungled plastic surgery cases of all time, that of socialite and Realtor Elaine Young, who got silicone injected into her cheeks at least once a month by doctor Jack Startz, involved that same hardening process. Young ended up with a monstrously disfigured face; Startz eventually committed suicide.

“You know, they get hard,” Rinna said on Today. “It’s gross. They are now whatever that was after they took out as much silicone as they could.”

But no regrets: Rinna considers herself a lip-enhancing “pioneer” and said she “never had a career” before getting her lips done. “So my lips have had their own career.”