The Modern Family actress is engaged and wants another baby, but how can a 40-year-old assure that will happen? 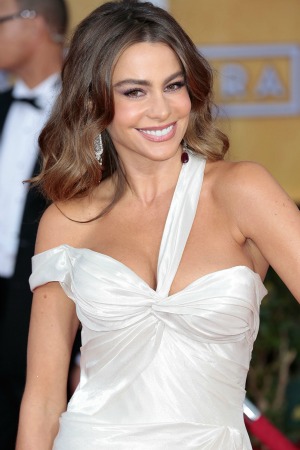 Sofia Vergara wants a baby, and is going to do whatever she can to make sure it happens. The 40-year-old actress knows time is not on her side, and has decided to make sure another baby is possible.

“I have to be careful what I eat because they’re freezing my eggs!” she told Vogue in an interview.

The real reason Sofia Vergara wasn’t at the Oscars >>

Vergara said she is taking hormone pills and injections to help her in the process.

“They want to get as many eggs as they can because usually you produce them but they’re not good,” she said, according to USA Today. “They have to be perfect, perfect, perfect ones. My boyfriend (Nick Loeb) is 37, younger than me, never had kids. So.”

Vergara has a 21-year-old son, but wants another one, sometime in the future, with her husband-to-be. It was just a few days ago a source told the New York Post the actress and her fiancé were attempting to use a surrogate to have the baby.

“A procedure has taken place, and Sofia and Nick will find out in a few weeks if it was successful, if the surrogate is pregnant, and if they will become parents,” the source told the paper.

And perhaps they have chosen a surrogate because of how important Vergara’s body is to her career. She tells Vogue it’s not the easiest body to deal with either.

“I mean, a normal girl will just put the dress on and leave. I need them to be like an armory,” she said, according to USA Today. “My dresses are like a work of art inside because, you know, I am 40 years old, I had a baby, and I am a 32F boob. And they are real still. When they are fake, you take the bra off and they are still there, perfect! Me — no, so I have to bring them up! I have to build the dresses up to here so that the bras — ach, it’s a whole, der — ugh — tchah!”

The actress is currently working on a remake of Heat along with Jason Statham, but not before appearing in Smurfs 2 in 2013.