Justin Timberlake is full of surprises. 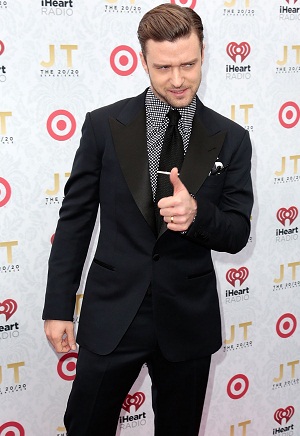 We all started off 2013 in a haze of excitement over Justin Timberlake‘s new album. March 19th couldn’t come fast enough! The summer tour needed to start earlier! We needed our Justin now, we got him now and, as it turns out, this time he’ll be sticking around a while.

He has to, right? After all, he told his album release party that a second album was on the way!

“Let me clear a rumor up,” JT told Ryan Seacrest, the host of his CD release party. “The news that this is only the first half of the album, that’s true. That’s all I’m gonna say!”

And then the entire El Rey Theatre burst into a round of hallelujahs like the earth’s largest angel choir. At least we imagine that’s what happened.

It seemed pretty obvious, really. The new album is called The 20/20 Experience (with that awesome first single, “Suit and Tie”) and yet it only has 10 songs. Not only did the numbers not work out right, but you also need two eyes to have 20/20 vision. It makes sense, then, that you’d need two albums to have a full 20/20 experience.

While that announcement may have been the biggest shocker of the night, the rest of JT’s album release party was pretty spectacular, too. To help everyone get into the festive spirit, “cigarette girls” passed out red bow ties and pocket squares to the guys and red lipsticks and neck kerchiefs to the ladies. Then Justin, decked out in his own slim-line suit and tie, came out to perform.

He was backed by the illustrious band The Tennessee Kids, who we also saw at The Grammys. Not only did he sing songs from the new album, he also let loose with a few oldies-but-goodies, too. He even changed one up a bit and turned it into a bit of a mashup!

Instead of ruining the surprise for you, we’ll just remind you: The 20/20 Experience release party will be televised on The CW tonight (Tuesday, March 19) at 8/7c.