A member of the cult targets women with the same name as Carroll’s wife Claire Matthews. Emma and Jacob are together again, though it isn’t the happy reunion you would expect. 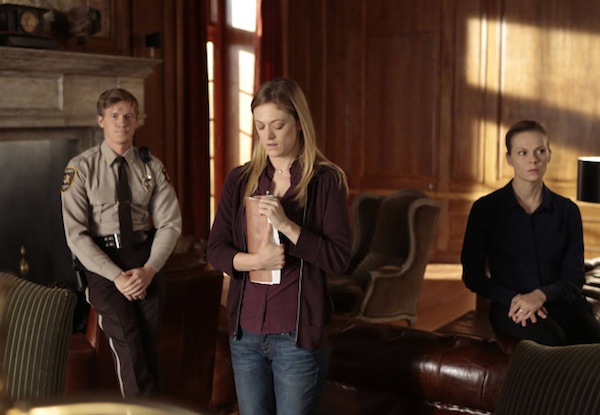 Part of the genius behind The Following is the show’s ability to create sympathy for these serial killer, insane characters. The show pulls it off well.

This week, we learned Jacob and Paul aren’t dead.

The two gay (Are they or aren’t they?) followers have such a desire to just matter in the grand scheme of things that you can’t help but feel for them. And the relationship they’ve developed is really quite sweet. They understand and watch out for each other. As we learn in this episode, Paul knew about Jacob’s repulsion to murder early on and promised not to tell Emma.

The show filled us in on what the two have been up to since we last saw them. They managed to escape after the police shooting and find Jacob’s mother for help. She’s seen the news, though, and isn’t ecstatic that her son has returned home. As a former nurse, she tries to help Paul’s wound as best she can, but it’s become infected. She tells Jacob that if Paul doesn’t get to a hospital soon, he will die.

Meanwhile, Joe Carroll’s got another manipulated follower up his sleeve so he can play yet another game with Ryan Hardy (Kevin Bacon) in hopes of finding his ex-wife Claire. The follower is a girl named Amanda (guest star Marin Ireland). She killed her husband and his lover after she caught him cheating. Now, she’s got a really big thing against cheaters. So much so that she wants to seek revenge on behalf of Carroll (James Purefoy) for his wife’s affair with Hardy by making Hardy truly understand that love hurts.

Amanda’s plan is to target and kill women with the same name as Carroll’s ex-wife Claire Matthews. She starts in a small diner where she shoots a woman through the stomach with a fishing spear.

Missed last week’s episode? Catch up with the recap >>

Carroll is hoping Claire will hear about the murders because, if she does, Claire will surely give up her location to protect the women.

Hardy works to ensure Claire doesn’t have access to any media, but it’s becoming harder for him to regulate facts of the case as the investigation has been transferred to the bureau in D.C.

While the FBI works to track down Carroll and his followers, Amanda kills another Claire Matthews.

Back to Paul and Jacob, we learn Jacob has left dozens of messages on Emma’s satellite phone, which is weird because in the past episodes, Emma claims she doesn’t have any contact with Paul or Jacob.

Jacob’s mother tells him he and Paul have to leave. Jacob’s father is on his way home, and his dad is sure to call the police.

Jacob tries to carry Paul from the house, but Paul stops him. He tells Jacob to leave him behind. Paul says he loves Jacob and that all he ever wanted was to matter. Paul tells Jacob he can do this.

Jacob understands what Paul wants and presses a pillow over Paul’s face until Paul is limp. 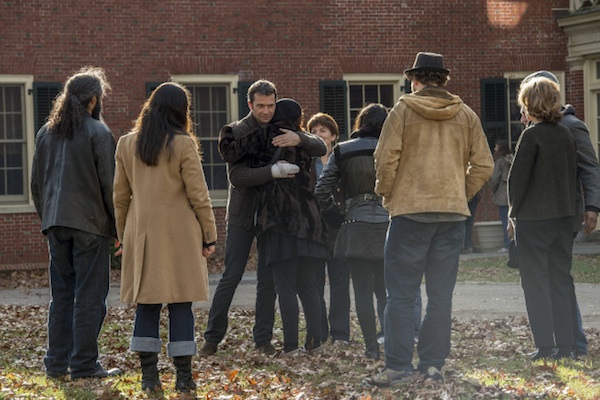 Hardy is able to track Amanda down just before she kills another Claire Matthews. He finds her in an abandoned warehouse with a staple gun pointed at the innocent Claire’s head.

Hardy offers himself up instead.

The Following gets a second season >>

Amanda tells Hardy that he’s a cheater and so he has to understand that love hurts. She demands an explanation for Hardy’s affair. He tells Amanda it’s because he loves Claire. He admits he still loves her. Hardy continues coaxing Amanda to shoot him instead of the girl.

In a moment of emotionally-induced action, she flips the gun on Hardy. But at that point, he’s been inching his way closer and closer to Amanda. When she turns the gun on him, he reaches out and grabs it, flinging it aside before she can hurt anyone else.

Roderick has a surprise for Emma

He tells Emma he received an email from a friend and wants to show her something.

Roderick leads her to the entryway of the house, and Jacob is standing in the doorway. She looks surprised and shocked to see him. He looks angry. He doesn’t move toward her. Just says, “Hello, Emma,” in a voice full of unspoken pain.

The star of this week’s show is definitely Jacob. He’s made his first kill, a big step especially because it was Paul. And now he’s found his way to the farmhouse and joined the other followers. He knows Emma’s been ignoring his messages, and he isn’t happy at all to see her. Do we sense a killer in the making?

Emma did tell Roderick she loves Jacob. And, by now, we know that doesn’t mean anything good given the title and theme of this episode.