33-year-old June Shannon has lost a significant amount of weight and has undergone a makeover. She debuted her new look (and figure) at the GLAAD Media Awards over the weekend. 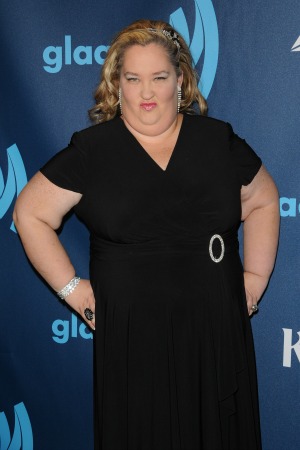 June Shannon, better known as Honey Boo Boo’s mom on the reality TV show, is feeling good and showing off her new look. The 33-year-old has lost 102 pounds since the show began filming two years ago, and showed up at the GLAAD Media Awards in New York City March 16 to show off her new look.

Will Mama June be on the next Dancing with the Stars cast? >>

“Wearing a fashionable long black wrap dress, the 33-year-old mom of four posed and pouted winsomely on the red carpet like a pro,” according to Us Weekly. “Her hair, held back by a sparkly headband, was styled into soft curls and her lips were painted a bright pink.”

Shannon said she didn’t work very hard to lose the weight though. Back in February, she told TMZ she had weighed 365 pounds when filming began in January 2011, and none of the weight was lost because of diet or exercise.

Stage moms face-off: Who loves a little too much? >>

“I haven’t done any surgeries. No diet pills. Never went to the gym,” Honey Boo Boo’s mom said. “But with the show I’ve been more active. They have my running around and going different places. I guess it’s paying off.”

Shannon was at the event because Here Comes Honey Boo Boo was nominated for their “positive portrayal of the LGBT community.”

And even though Shannon got dressed up for the night for the awards, she was missing her home and her family.

“[Alana’s] not in town,” she told Us Weekly at the event. “She’s actually back at home with her father and her sister, and they’re actually in production. This is my first trip without her and I do miss her. But we did Facetime while I was getting ready. It was really sweet. We showed her that it was snowing.”

The Amazing Race ended up winning the category Here Comes Honey Boo Boo was nominated for.