The story of Bonnie and Clyde is alive and well. Lifetime is producing a mini-series based on the infamous couple. They recently added a new star to the cast, which includes a mix of veterans and up and comers. 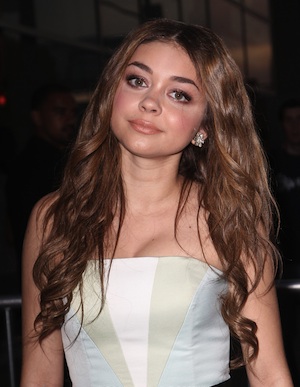 The Lifetime/History Channel is fleshing out Bonnie & Clyde. Their four-part miniseries based on the criminal couple has added another Barrow. Modern Family‘s Sarah Hyland has joined the cast.

According to The Hollywood Reporter, Hyland will play Blanche Barrow. She’s the young wife of Clyde’s brother Buck, as played by Lane Garrison (Prison Break). The rest of the clan includes Emile Hirsch as the infamous Clyde and The Borgias‘ Holliday Grainger as Bonnie Parker.

The cast also features two Oscar-winners in William Hurt and Holly Hunter. Hurt stars as Frank Hamer, “a Texas Ranger known for his involvement in tracking and killing the 1930s outlaws,” while Hunter will play Bonnie’s mom.

Since Bonnie & Clyde is a joint project, it will air on both Lifetime and the History Channel. It sounds as if they’re trying to recreate the success of last year’s Hatfields & McCoys. That was a huge hit for the History Channel, which charted the long-running feud between the two American families.

2013 SAGs: Why we need to be watching Hatfields and McCoys >>

With the right execution, Bonnie & Clyde could be just as big. The couple’s life and death is ingrained in pop culture. The most notable adaptation was the 1967 feature film with Warren Beatty and Faye Dunaway in the title roles.

Before Hyland tackles Barrow, she’ll appear in this spring’s Scary Movie 5. The actress has a supporting role inspired by the Evil Dead series. The film hits theaters April 12.

What do you think of the new Bonnie & Clyde?

3 hrs ago
by Tabby Kibugi