Michelle Shocked stunned her San Francisco audience on Sunday night with an anti-gay rant that caused most of the crowd to leave after being offended by her comments. 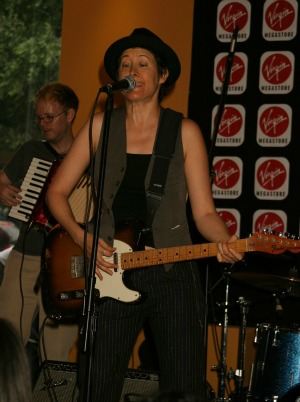 On Sunday night at San Francisco’s music venue, Yoshi’s, singer Michelle Shocked did exactly what her name means, she shocked the audience. About halfway through her show, Shocked went on an anti-gay marriage rant.

She told the audience, “God hates f*gs and you can tweet that I said so.”

The audience did exactly that. The tweets went out immediately as close to two-thirds of the attendees walked out of the venue, according to the San Francisco Chronicle.

Matt Penfield, who attended the show, tweeted, “That was f**king cra-zy! I was tweeting Michelle Shocked’s set onstage (for her). All cool. 2nd set, she got up went full hate speech.”

The alternative-folk artist spoke freely about her beliefs to the crowd, “I live in fear that the world will be destroyed if gays are allowed to marry.”

Besides the fact that San Francisco has a big gay population, Shocked herself came out and talked about being a lesbian back in 1990. However, she became a born-again Christian about a decade later and changed her position on homosexuality.

According to the Best of New Orleans, she described herself as “the world’s greatest homophobe,” while she was performing onstage at the Wild Goose Festival in North Carolina in 2011.

Her statements at the concert last night immediately shut down the show. The San Francisco Chronicle reported her microphone was cut off and the lights were turned on at the club. Yoshi’s representative, Lisa Bautista, also made sure an apology was issued and refunds were offered to the offended patrons.

As a result of the San Francisco incident, Shocked’s March 29 date in Novato, California, as well as the May 5 performance in Evanston, Illinois, was cancelled immediately.

SPACE in Evanston issued a statement on its website, “After speaking with the promoter of that show about the nature of the remarks, it’s clear that this is no longer a show we’re willing to put our name on.”

Shocked did tweet after the cancelled concert which alluded to the event, “Truth is leading to painful confrontation #shortsharpshocked.”

The height of Shocked’s fame came in the late 1980s through the mid-1990s starting as a huge influence in college radio to one of the headliners of Lilith Fair.

With the cancellation of several concerts after her comments, it remains to be seen how she will move forward after offending so many of her fans.