Oh, how we’ve missed the colorful commentary of Len, Bruno and Carrie Ann on Dancing with the Stars! Thankfully, another season of the hit show premieres tonight at 8/7c on ABC and SheKnows has tapped fan favorite Karina Smirnoff to spill inside DWTS deets each week! 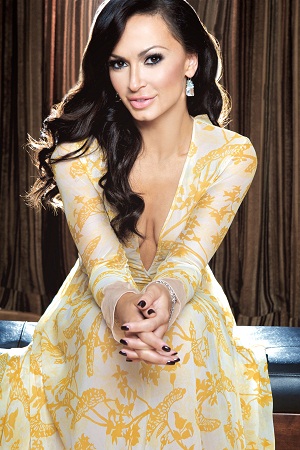 The battle for ballroom glory is back! Season 16 of Dancing with the Stars premieres tonight, with 12 new celebrities set to shake their groove things for a chance at winning ballroom bragging rights and that shiny mirror ball trophy. Do you ever wonder, though, what really goes on behind the scenes leading up to a new DWTS champion being crowned?

Sure, they air footage of the dancers and their stars during rehearsals — but we all know there’s more to the story than can be seen in those clips. This season, SheKnows teams up with veteran dancer and DWTS fan favorite, Karina Smirnoff, to bring you a uniquely inside perspective.

The new cast of DWTS is revealed! >>

Every week, we’ll be touching base with Karina to uncover the deets (and drama) of competition with her dancing partner — Baltimore Ravens wide receiver and recent Super Bowl winner, Jacoby Jones. Does Jacoby make all the right moves during a salsa dance? Or does he bomb at samba? Did the two become instant BFFs or was she ready to hurl a stiletto at him? Karina will fill us in on all of this… and more!

As one of the hit show’s featured dancers for the past six years, Karina has earned a spot in America’s heart — in 2011, she was the most Googled professional dancer on DWTS. The Season 13 Mirror Ball Champion, the Ukrainian charmer has plenty of pedigree to go along with her fun personality.

OMG! How does she keep herself in such awesome shape? >>

Karina began her ballroom dancing career at 11 years old and has since become a five-time US National Champion, World Trophy Champion and Asian Open Champion, among other accolades and awards. The brainy beauty also earned two degrees from Fordham University in New York: a BA in Economics and another in Information Systems Programming.

As for Jacoby’s dancing credentials, all we know for sure is that he does one mean Harlem Shake!

Check in with us every Monday night at 7 p.m. to catch Karina’s commentary on the competition and don’t forget to vote! You can cast your vote for Karina and Jacoby by calling 1-800-868-3412 or by texting VOTE to 3412 up to one hour after the show. You can also vote until 10 a.m. Tuesday by visiting ABC.com. You can text as many times as there are partners, which means you can vote 12 times tonight!

For updates from Karina and Jacoby all season long, follow the stars on Twitter at @karina_Smirnoff and @therealjacoby12.