At 44, singer Marilyn Manson apparently has a preteen sense of humor, dropping a smoke bomb at a party that also featured James Franco and Ashley Benson holding hands, and Selena Gomez putting the kibosh on Justin Bieber songs. 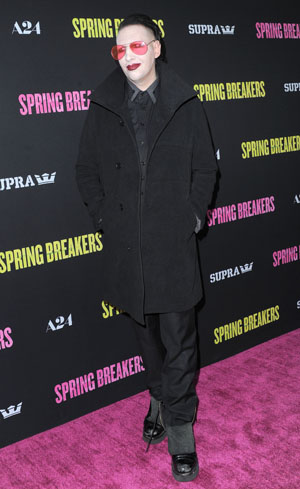 Emergency responders rushed to the scene of a Los Angeles party for the premiere of Spring Breakers, Page Six reported today, after rocker Marilyn Manson dropped a smoke bomb as a prank.

A “spy” saw Manson, “in makeup and sunglasses,” lobbing the smoke bomb in the parking lot of the Emerson Theatre as he drove away in his car.

Page Six also reports that as “smoke [b]illowed, firemen pulled up to inspect Manson’s ‘bomb’ and make sure it was innocuous.”

Yeah, ever since a whole bunch of innocent people were killed at a Dark Knight Rises screening, people’s sense of humor about bombs at the movies: probably not so keen.

Page Six also reports that James Franco and Ashley Benson, rumored to be dating, were seen holding hands. Yep, hand-holding in public, that’s the next stage in a relationship; now let’s wait and see if they hold hands while being photographed!

At that same gossip-worthy party, HollywoodLife reports, Selena Gomez’s people apparently banned the DJ from planning any songs from Gomez’s ex, Justin Bieber. HollywoodLife says a partygoer requested “Beauty & the Beat,” the DJ responded, “No, I’m sorry I can’t play it. I was told specifically from her people that any Justin Bieber songs were off-limits tonight.”

Spring Breakers is set to open in 1,000 theaters on March 22 after a limited run in Los Angeles and New York City, says the Hollywood Reporter.