The Perks of Being a Wallflower star, 22, makes it clear she’s not interested in being Anastasia Steele. 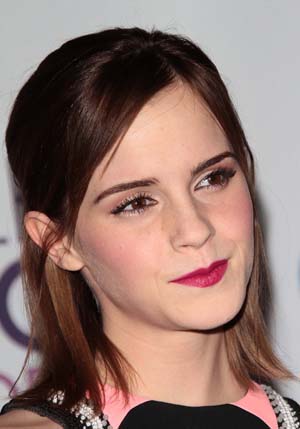 Well, that’s the thing about rumors. Sometimes they prove to be false: Emma Watson will not play Anastasia Steele in the forthcoming adaptation of Fifty Shades of Grey.

“Who here actually thinks I would do 50 Shades of Grey as a movie? Like really. For real. In real life,” Emma tweeted on Saturday.

She followed that up with a tweet that was just a single question mark, then “Good. Well that’s that sorted then.” And then a smiley face.

So I guess what you’re telling us, Emma Watson, is that you just can’t trust rumors sourced to a hack?

Watson is probably feeling a little irritable since she’d already denied she was to be in the movie adapted from E L James’ popular book when rumors first circulated last summer.

“I haven’t read the book, I haven’t read a script, nothing,” she told Entertainment Weekly. “There are so many movies you become attached to when I’ve literally never even received a phone call. I never even saw a script.”

So as for now, who knows who will play Anastasia Steele, the trembling college co-ed who meets dominant older business bro Christian Grey and lets him do a whole bunch of stuff to her. Unconfirmed casting rumors have posited actors like Ian Somerhalder, Ryan Gosling and Alexander Skarsgard as Christian Grey.

We should hear something soon, as the Fifty Shades of Grey adaptation is planned for summer of 2014, according to Glamour.

Mila Kunis also denied she was to play Steele at an Oz The Great and Powerful press conference in the UK.