We spy with our little eyes a new tattoo of one heart with two sides. 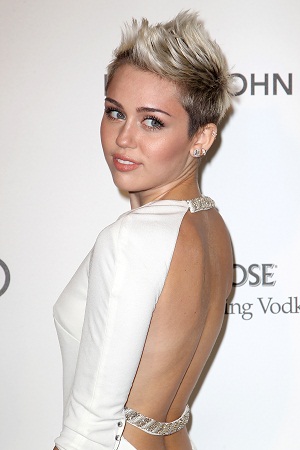 As if we weren’t already picking apart her every move, Miley recently scored a new tattoo that has sent many gossip hounds over the edge as they’ve tried to piece together a meaning.

Miles’ new tattoo was done by the uber-famous tattoo artist Kat Von D. After the ink was in place, the artist tweeted, “Just did the RADDEST tattoo on @MileyCyrus -a miniature rendition of a daVinci anatomical heart!”

10 better reasons to talk about Liam >>

While many seem to think the tattoo represents two hearts, they’re sadly mistaken. The daVinci work was actually a representation of one heart with two sides. What could this mean? The age-old philosophy of “two hearts beating as one” might play a part in the tattoo. It could also be a reference to her “other half,” Liam.

If that’s the case, Miam (Liley?) supporters will be able to breathe a sigh of relief to think they might actually still be together. There have been plenty of rumors saying just the opposite recently.

Multiple sources have told People that (the feisty) Liam had fled home to Australia to get away from Miley’s wild ways. Others say cheating might have been involved in the separation. On the other hand, when one of her dancers recently tweeted that she’d sent out her engagement ring to be resized, Miley lamented that she’d done the same thing and now everyone was assuming she and Liam had broken up. Not exactly a denial… but pretty close. Could this new tattoo, which certainly must represent something to her, be a sign that everything with Liam is fine?

Hopefully, if Miles was there to get inked in the name of love, Kat Von D spent some time telling Miles about her own cautionary tale. After all, it wasn’t that long ago that Kat had her Jesse James tattoo removed.

It’s entirely possible. Other reasoning is possible, too, though. Maybe Miley just liked the image. Or maybe she thinks the two sides of one heart represents to two sides to her heart?

We may never know the real reason behind the tattoo. So, what do you think it represents?