Which do you think Anderson Cooper was more excited about: Madonna as a fan or the GLAAD award? 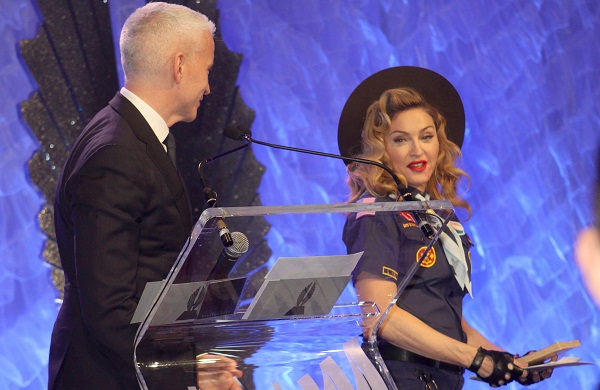 The GLAAD Awards were held over the weekend and newscaster Anderson Cooper was honored with the Vito Russo Award… but not before he waited out Madonna‘s 12-minute long speech.

The speech made the wait worthwhile, though. Not only did Madonna spend a significant amount of time gushing over Anderson, but she also went on to give the Boy Scouts a piece of her mind. And she did so while wearing a Boy Scout uniform.

She explained the uniform as such:

I wanted to be a Boy Scout, but they wouldn’t let me join. I think that’s f***ed up. I can build a fire. I know how to pitch a tent. I have a very good sense of direction. I can rescue kittens from trees. I want to do good for the community. Most importantly, I know how to scout for boys. So, I think I should be allowed to be a Boy Scout and they should change their stupid rules. Don’t you? …I was a Girl Scout, but I got kicked out. Wanna know why? Because my skirt was too short and I never sold enough cookies.”

Madonna rightfully earned hoots, hollers and applause from her audience. Lady M, minus her longtime English accent, may have delivered her thoughts in a light-hearted manner, but she was all about her “axes to grind.” During her time on stage, Madonna also addressed bullying, the Russian imprisonment of the girl rock group Pussy Riot, and religious tolerance.

She was talking about the closeness the internet fosters, but that doesn’t actually exist. Madonna made points of saying that people need to come together, sit down in a room and talk for that closeness to actually exist.

Once she’d ground down all her axes, Madonna went on to talk about Anderson’s bravery and his work in the LGBT community. She laid every compliment on him should could think of… from his brains to his eyes (multiple times) and his heart. At one point, it even looked like she grabbed his butt!

Check out the video for her whole speech:

Congrats, AC: On your award and your new fan!