The parents-to-be are looking to the future. But according to Kate, they do not yet know the gender of their baby — and they aren’t in agreement over which they’d prefer. 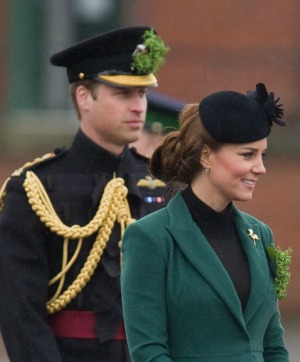 If Kate Middleton and Prince William know the sex of their baby, they are working hard not to let anyone know. Despite a slip last week, which made people think she was giving away the secret, it appears Kate and Wills are as much in the dark as everyone else.

According to ABC News, an Irish guardsman, Lee Wheeler, asked the Duchess of Cambridge Sunday during a St. Patrick’s Day ceremony whether she and the dad-to-be have learned the sex of their baby.

“Not yet,” she responded, according to The Associated Press.

Not only have they not learned their baby’s gender, but it looks like the future parents are in a bit of disagreement over whether they’d prefer a boy or a girl.

“She said, ‘I’d like to have a boy and William would like a girl,'” Wheeler said, according to ABC News.

Wheeler also said Middleton told him they had not yet decided on a name (or names) for their baby. A British tabloid printed what it said would be the baby’s name, supposedly giving away both that secret and the baby’s sex. But Middleton’s statement makes it seem like that is all just gossip.

For now, it looks like she and William are working on enjoying their time together and this pregnancy.

Their appearance at the St. Patrick’s Day ceremony was “fulfilling a centuries-old tradition of handing out sprigs of shamrocks to Irish Guards at Mons Barracks in Aldershot, Hampshire,” said ABC News.

Middleton showed up in a green coat (which, disappointingly, did not show much sign of her growing baby bump) and green shamrock pin, with a sprig of shamrocks pinned to her coat.

The mom-to-be is now five months along and is due in July. The gender of the child is less important than it was just a month ago, however, since British law will now allow the child to become third in line to the throne, even if it is a girl.