On this episode of The Walking Dead, called “Prey,” Andrea finds herself in a very difficult situation as she discovers the Governor’s true intentions for her friends. 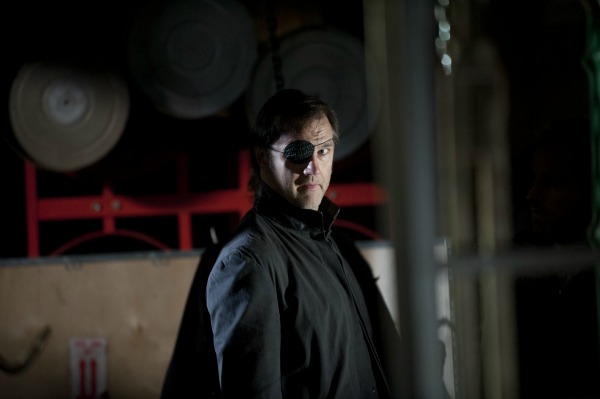 The Walking Dead recap: Rick and the Governor face off >>

The episode starts in the past back when Andrea (Laurie Holden) and Michonne (Danai Gurira) were traveling during the winter. Back in present-time Woodbury, the Governor has everyone packing up weapons for war and still fooling them all into believing that his intentions are good, even (unbelievably) Andrea. It’s not until Milton (Dallas Roberts) shows her the Governor’s secret torture chamber that she finally starts to believe he does not intend to make a deal with Rick (Andrew Lincoln) and her friends at the prison.

So Andrea decides to run and soon the Governor is hard on her tail. Back at Woodbury, the Governor’s henchmen are trying to convince Tyreese to help prepare for the meeting by gathering up a herd of zombies they’ve been keeping in a pit. Tyreese, showing a lot more smarts than Andrea, immediately decides that’s a bad idea and refuses to help. All this while, Andrea is trying her best to get to the prison to warn her friends, being chased by zombies and the Governor himself.

The Walking Dead recap: Morgan’s back! >>

Then came another one of those quiet-yet-intense scenes they do so well on this show. I’m not a nail biter, but I was about ready to start during that whole scene with Andrea and the Governor in the abandoned building. She gets away and we’re led to think he might be dead, but of course he’s not, and of course he gets her right as she gets to the prison and thinks she’s home free. Now she’s locked up in his torture chamber and not one single person knows she’s there.

“They deserved what they got. They weren’t human to begin with.” — Now I’m even more intrigued about Michonne and her zombie companions.

Deciding that the Governor was even more insane than I thought when I saw him setting up all of his instruments.

Milton finally realizing what the Governor was up to and showing Andrea the room of torture.

Creepy Governor is creepy with his whistling and his tape recorder.

Cheering Andrea on when she put the gun up to the window.

“Like it or not, I belong here.” “Then if you stay, you can’t keep looking the other way.”

Tyreese pointing out that they were on the wall to keep zombies from getting in, not to keep people from leaving.

The Governor figuring out how much Milton told Andrea. Uh oh. 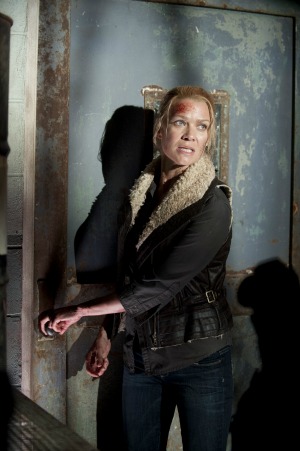 “That crazy-ass cowboy and some chick with a sword.” — Best description of Rick and Michonne ever.

Jumping about a foot when that zombie grabbed Andrea from behind the tree.

Tyreese refusing to get involved with sending the biters to Rick and his people. Yes!

Freaking out as much as Andrea when the Governor came flying at her in his truck. Honking? Really? Like, what, she’s going to stop and jump in?

And… more creepy whistling. Can someone kill him please?

Andrea sliding out and opening the door to let all the zombies in. Brilliant.

Andrea watching through the window as the Governor was bombarded by zombies.

Andrea calmly walking away as she heard the Governor screaming.

The look of relief on Andrea’s face when she saw the prison.

Dangit, I knew that moment was too happy for it to end well.

Practically screaming at Rick when he put the scope down. Noooo!

Well, there’s one I don’t think we’ve seen yet. Barbecue zombie anyone?

Wanting to scream at Tyreese for falling for the Governor’s lies.

Figuring out that Milton set fire to the zombie pits. Good for him!

The awesome music that played as the camera wandered to Andrea in that chair.

What did you think of this episode of The Walking Dead? Got any ideas how Andrea is going to get herself out of this mess? Do you think someone will actually kill the Governor at some point this season?