This amazingly beautiful and brilliant animated 3D film could be the best of 2013 so far. With the vocal talents of Emma Stone and Ryan Reynolds, this story about a teenage Neanderthal girl who falls in love with a young Homo sapiens man reveals how love may be responsible for our very survival as a species. 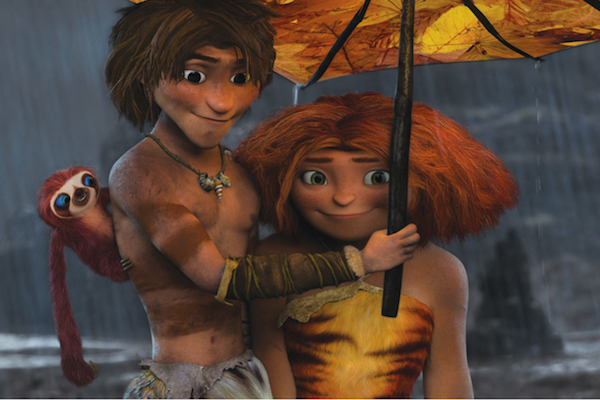 Meet The Croods. They are a tight-knit nuclear Neanderthal – or caveman – family. Physically, they are short and stocky and extremely muscular with a low, sloping brow ridge. Eep (Emma Stone), is a typical teenager struggling to tolerate her annoying family and express herself. She’s ever curious about the dangerous, forbidden world around her and often defies her strict father’s, Grug’s (Nicolas Cage), stringent rules.

Eep’s mother, Ugga (Catherine Keener); her grandmother, Gran (Cloris Leachman); and little brother, Thunk (Clark Duke), all take Grug’s side, believing the world is a dangerous place and nothing new should ever be attempted or explored. 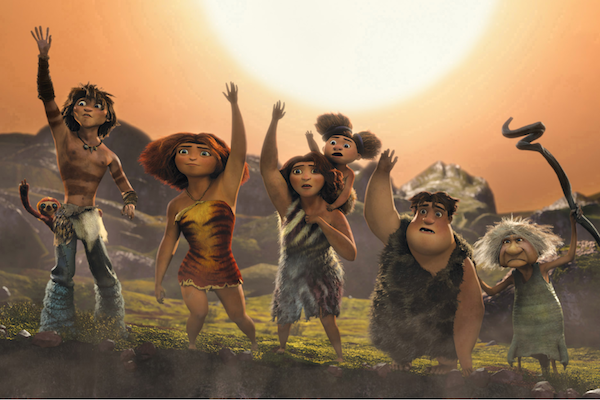 When their cave is destroyed by earthquakes and volcanic activity, however, the Croods have no choice but embark on a journey to find a new home. When Eep encounters a young man named Guy (Ryan Reynolds), it’s love at first sight.

Guy is thinner and less muscular than the Croods, and he seems to have plenty of food at hand. Why? Guy is like us, a Homo sapiens, the most modern of our species and the most technologically advanced. The entire Crood family marvel at his ability to create fire and use shoes.

But patriarch Grug is reluctant to change for fear of putting his family in danger. Soon though, he has no choice but to follow Guy to “tomorrow” — a dazzling place with a million suns. 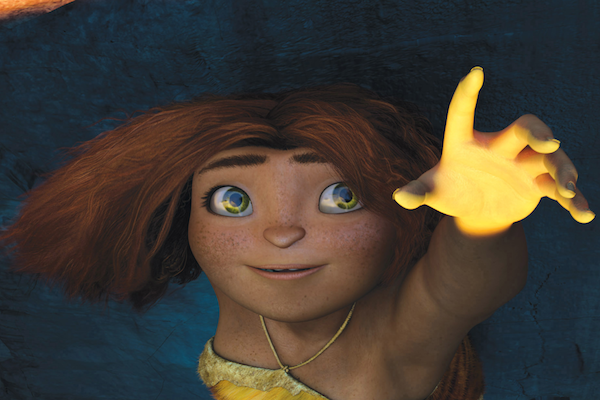 The true genius of this movie isn’t necessarily in the characters or even in the story line. Rather, it’s in the story’s acute examination of what it means to be human. Eep is epically curious, demonstrating humanity’s best defining characteristic: the desire to know more about the world around us. The Croods are a strong family, bound by love and loyalty. They engage each other in storytelling, humankind’s oldest tradition that is so engraved in us, it brings us to the movie theater today.

A hunting scene in which the family works together as a team to capture a large bird egg looks like footage from a football game, with the egg as the football. This film asks the question: Tens of thousands of years ago, were our lives really all that different?

Bottom line: The Croods celebrates humanity in a way never before seen on film, and the 3D special effects will make you proud of one of humankind’s most expressive achievements. This is a film the whole family will enjoy!

Run time is 1 hour, 38 minutes. There is a very short animation of the mouse-sized elephants called “Mousephants” tooting their trunks after the credits.