In the upcoming episode of Glee, New Directions will take on songs that everyone loves, but no one wants to admit. 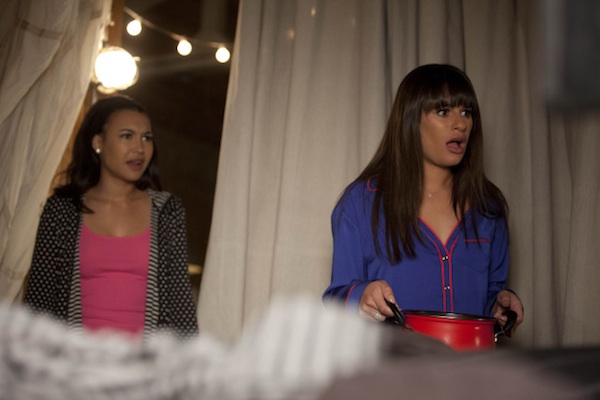 Glitter, gold, hula hoops and The Spice Girls, of course.

This week’s episode of Glee will feature all of our favorite guilty pleasure songs while picking up with the drama where we left off last week at McKinley High School and in New York.

The plot line surrounding Rachel (Lea Michele) and Brody (Dean Geyer) will continue to unfold. After Santana caught Brody in the act last week by posing as a client, the girl is not giving up with a vengeance. She is set on convincing Rachel of Brody’s secret night job, proving that even though she can talk trash better than anyone, she’s a loyal friend at heart.

We’ll also find out more about Ryder’s mystery online girl. My guess is it’s someone at McKinley. Knowing Ryan Murphy and the trends of the show, they’re using this as an opportunity to uncover an issue they previously haven’t brought up: The dangers of online dating.

This week may also be the time when Blaine finally admits he has feelings for Sam. In the preview from Fox, Sam challenges Blaine to admit his guilty pleasure. Blaine just blushes and looks away. In the preview, we also see Blaine ask Sam, “Do you have feelings for me?”

Missed a few episodes of Glee? Catch up with the recaps >>

Now that Mr. Schuester (Matthew Morrison) is back in charge of the Glee club, we’ll start to see what’s next for Finn (Cory Monteith). When we last saw him, he was punching Brody in a hotel room and telling him to disappear from Rachel’s life. Now that Brody’s sketchy career is about to be exposed, will Rachel turn back to Finn? Or will she defend Brody and his choices? It’s uncertain with this new Rachel emerging in recent episodes. She herself considered going nude in a movie. And she had Brody’s full support to do so. Can she justifiably turn on him once she discovers his dirty little secret?

All this drama will be accomplished with the help of skin-tight, white spandex and a dance performance like Glee hasn’t seen in a long time.

Glee is all new this Thursday on Fox. Here is the preview of the episode if you haven’t seen it yet: