Theo James is set to take on the role of Four in the futuristic thriller Divergent. 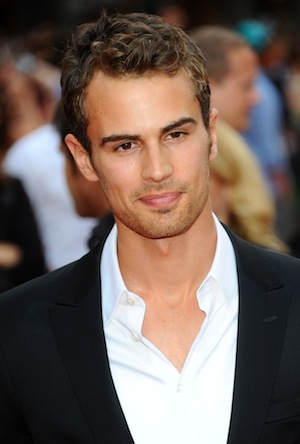 One of Downton Abbey‘s most memorable hunks may be the next Robert Pattinson!

It was announced on Friday that Theo James has been cast in the forthcoming adaptation of Divergent.

Many will recall that James appeared on Downton Abbey as the doomed Turk Mr. Pamuk.

James will take on the role of Four, alongside The Descendants star Shailene Woodley.

Divergent is set in a future world in which people are divvied up based on their personalities. Tris Prior (Woodley) discovers that she is a Divergent and does not fit into any of the groups. She soon uncovers a conspiracy to destroy all Divergents.

Four serves as the leader of the Dauntless faction.

Neil Burger, who helmed the hit psychological drama Limitless, is slated to direct the flick.

“We took our time to find the right actor to fill the role of Four, and Theo is definitely the perfect fit,” Erik Feig, Lionsgate Motion Picture Group’s president of production, said in a statement. “Veronica has crafted a truly iconic character in Four and we cannot wait to begin production and bring him and this story to life for millions of fans around the world.”

The film is based on the best-selling 2011 novel by Veronica Roth. Evan Daugherty penned the film’s screenplay.

The success of the $3.3 billion–grossing Twilight franchise has led to the release of numerous film adaptations of young-adult novels like The Hunger Games and Beautiful Creatures.

Divergent will begin filming in April and is scheduled to hit theaters on March 21, 2014.