With pink hair and a sassy new attitude, Elena is poised to fit right in in the Big Apple. But with a secret scheme and no inhibitions, she’s planning on doing more than partying. 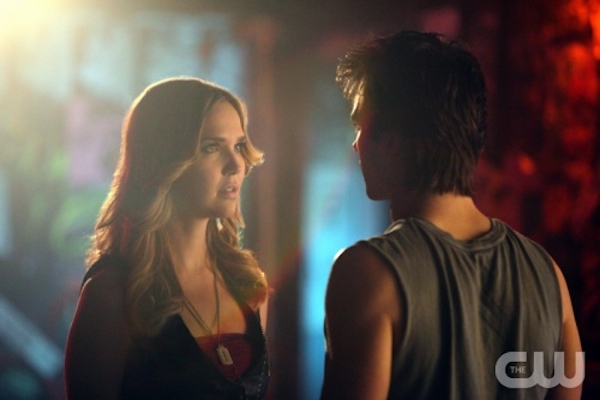 If we got anything from last week’s episode of The Vampire Diaries, it’s that Elena (Nina Dobrev) is a loose cannon now that she’s turned off her emotions.

Putting her in New York City is just asking for trouble. But Damon’s got this thing with reliving his partying days in the 1970s and thinks Elena could use some time away. Maybe not a good idea for the citizens of New York.

But perhaps it’s a good idea for Damon (Ian Somerhalder). From the looks of the promo, he’ll be getting some rooftop action.

Damon tells Stefan (Paul Wesley) that the vacation to New York is simultaneously a hunt for the cure. Perhaps we’ll uncover more secrets about the relationship between Damon and Will, the vampire he killed last week.

The upcoming episode, “Because the Night,” will also offer a look at Damon’s hedonistic life through flashbacks. The CW promises to reveal a “complicated encounter” he shared with Lexi back in the ’70s. If you remember, Lexi was the vampire who helped Stefan regain his humanity. Damon killed her in Season 1, but she has become a consistent character throughout the show via flashbacks and ghost appearances.

Missed a few episodes of The Vampire Diaries ? Catch up with the recaps >>

Back in Mystic Falls, we’ll catch up with Bonnie, who was absent last episode. She’s apparently still recovering from Shane’s and Jeremy’s deaths and struggling to control her new powers. Now that Shane isn’t around to keep her head straight, Bonnie will have to find a new way to keep a grip on reality and make the right choices.

Meanwhile, Caroline and Stefan are focusing on the cure. The two convince Klaus to help them track Silas down. No word on if Hayley will be sticking around as well. We hope so, as there’s bound to be some awkward tension with Caroline, Klaus and Hayley all in one room so soon after Klaus and Hayley’s hookup last episode.

Here’s the “Because the Night” sneak-peek video: