The wait is over. Scary Movie 5 is almost here, and the film’s first poster has been released. It features plenty of familiar faces, including returning star Charlie Sheen. 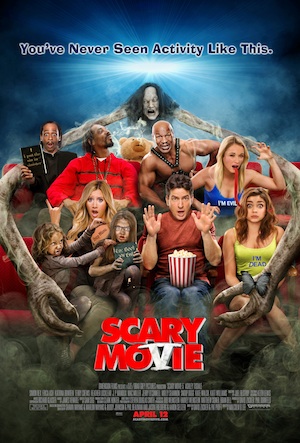 It’s been seven years, but the Scary Movie franchise is back. This spring, we’ll get a new sequel in the parody series. There’s a fresh crop of films to be mocked, and Scary Movie 5‘s got them covered.

Trailer: Lohan pokes fun at herself in Scary Movie 5 >>

This time around, Scary Movie’s poking fun at Guillermo del Toro’s Mama, the upcoming Evil Dead, Paranormal Activity and Ted. Yes, Seth MacFarlane’s Ted has found its way into a horror film. For some, the idea of a talking bear could be terrifying.

Noticeably absent from the poster is Lindsay Lohan. It appears that she and Sheen have similar screentime, but she’s MIA. To be fair, Sheen did headline Scary Movie 3. Therefore, he already has a connection to the franchise. You also may have noticed that mainstay Anna Faris isn’t featured. Maybe she’ll make a cameo?

The film centers on a French dance company director named Pierre and his latest production. Jody (Tisdale), a late-20s mother of two, and her late-20s African American friend Kendra (Erica Ash) are vying for the lead. Jody’s controlling mother is determined to get her the part. But once the company’s veteran dancer Heather Daltry (Molly Shannon) is cut, everything goes berserk.

Will you be seeing Scary Movie 5?