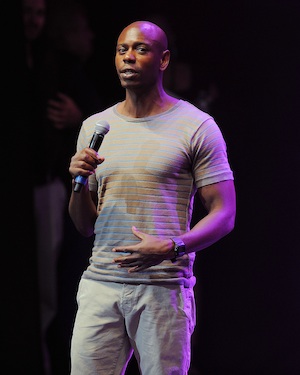 Fans hoping for a Dave Chappelle return to comedy may just get their wish. Dave Chappelle gave a surprise performance at New York’s Comedy Cellar and joked with Chris Rock — who joined Chappelle — that the two should tour together.

The Los Angeles Times broke the story regarding the prospect of Dave Chappelle and Chris Rock going on a comedy tour together a few days ago. “You should come down to Palm Beach,” said Chris Rock to Dave Chappelle.

“After next Tuesday,” Chappelle responded, “I’m free for like 11 years.” The comment seemed tinged with both humor and honesty so fans are unsure if Dave Chappelle is joking.

Chris Rock didn’t seem to think Chappelle was joking. The two discussed availability onstage and said they could possibly tour in October 2013. “This could be the show,” said Chappelle to Rock. “Fireside chats with Chris Rock.” “I’m in,” said Rock.

Dave Chappelle abruptly left his wildly popular Chappelle’s Show in 2005. He later revealed to Oprah Winfrey that the constant pressure to balance art and business interests became too problematic. Chappelle also expressed unhappiness with the sketch comedy format of the show and said some of the skits made him feel “socially irresponsible.”

When Chappelle appeared in blackface for one of the performances, Dave told Oprah he later felt uncomfortable with the reaction from some of his white employees. “There was good-spirited intuition behind it,” said Chappelle to Winfrey. “So then when I’m on the set, and we’re finally taping the sketch somebody on the set [who] was white laughed in such a way — I know the difference of people laughing with me and laughing at me — and it was the first time I had ever gotten a laugh I was uncomfortable with. Not just uncomfortable, but like, should I fire this person?”

However, fans should be skeptical of a Chappelle-Rock comedy tour. “You know how he is,” said a friend of Chappelle’s to the Los Angeles Times when the paper attempted to reach out for an update. “Dave’s just a reclusive dude.”