SheKnows caught up with indie-pop duo Matt and Kim during their tour stop in Phoenix, Arizona. The couple gave us the dirty details on filming “It’s Alright,” performing at Ultra Music Festival, life on the road as a couple and more.

SheKnows caught up with indie-pop duo Matt and Kim during their tour stop in Phoenix, Arizona. The couple gave us the dirty details on filming “It’s Alright,” performing at Ultra Music Festival, life on the road as a couple and more. 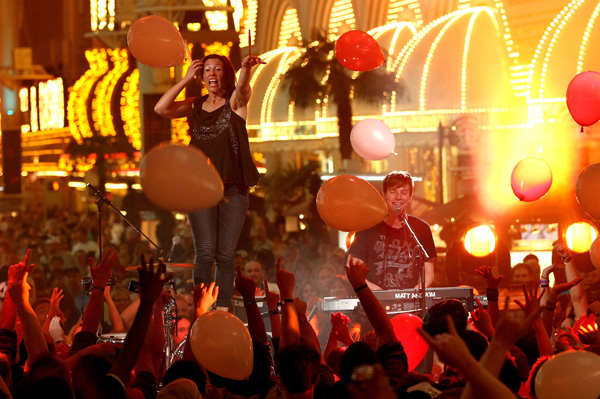 Known for their infectious onstage energy and quirky music videos, Matt Johnson and Kim Schifino have made a name for themselves as the power couple making waves in the indie, pop and electronic music worlds. Four albums and six years of touring later, they’ve shared the stage with bands ranging from punk band Against Me! and indie-rock foursome Passion Pit to DJ acts Tiesto and Avicii. Unable to be pigeonholed into one genre, their music ? with hints of hip hop, punk, techno and nearly everything in between ? is, no doubt, gaining popularity.

We caught up with the duo backstage in Phoenix, Arizona, and they dished on everything from their upcoming performance at Ultra Music Festival and their dream lineup to spending every waking moment together on the road.

SheKnows: You have a lot of exciting shows coming up, including Ultra Music Festival. How does it feel to be on the lineup alongside some of the best electronic dance music acts in the world?

Matt Johnson: Soon, we’re going to be in Miami for Ultra Music Festival, which is predominately electronic dance music. It’s funny, we keep getting asked, “Are you nervous?” because we’re a live band ? live drums, vocals, singing, all that. But, in the end, where we always make sense is wherever the dance party is.

Kim Schifino: Our shows are not shows where people stand or sway; it gets pretty crazy. We do a lot of things in our sets that will cover some hip hop tracks, or stop for a second to have a dance party to a Baauer song. I think it fits really well, and I think it’s going to be exciting.

MJ: I always thinks it’s funny, one of our first supports ever was with this punk band Against Me! and people would say, “You’re too electronic for that; people are going to hate you on that tour!” But it made sense; when people go out, they dance, they mosh, they crowd surf ? that’s what a Matt & Kim show is like. It’s just funny that we’re in-between two worlds, but it doesn’t mean we don’t fit anywhere. It just means we fit in more places. The only place we don’t fit is where people go and stare at their shows to listen to music.

On their dream lineup for a festival

SK: Let’s turn the tables. If you were creating your own festival, what would your dream lineup be?

MJ: Japanther, Japanther’s there; Girl Talk, who’s always one of my favorite shows; and Dan Deacon.

KS: That would be a really good festival. We should get on that!

MJ: And Matt and Kim! We’re headlining that.

On what makes the Matt and Kim audience so bada**

MJ: Part of what separates the Matt & Kim audience is we really try to make the whole building know that they’re all part of the show. People always say, “You’re just two people. How do you project so much energy?” And we say we’re not two people; we’re 2,002 people. So we always try to make a lot of light in the rest of the room, and we all feed off each other.”

On being in a relationship — on the road 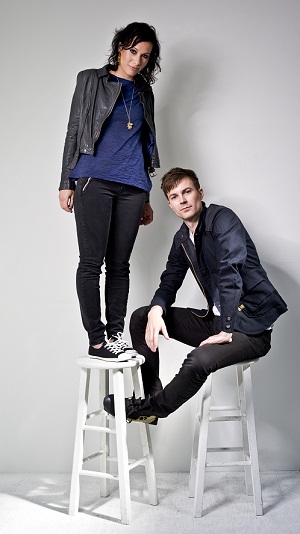 KS: I will say, being in a relationship on the road, we get along great. But for some reason, this last tour, I’ve been having the craziest dreams where Matt’s cheating on me. Or we’re broken up but still best friends. It’s really weird; I think there’s something with the bus.

MJ: I think there’s a gas leak in the bedroom. But, it is interesting. There’s no separation between the personal life and the professional life. We spend every waking second of every day together. The only times we’re apart are during the holidays when we go to our own family’s houses.

KS: I would say, out of the year, we’re apart five days.

MJ: In any other relationship I would have been in, we would have killed each other, in like disastrous, terrible ways.

KS: This was from the beginning when Matt and I first started dating, we weren’t a band; we were doing art projects together, film projects, and we really work well together, and we have similar ideas. We bounce ideas off of each other well. I feel like it would be tough if we were always butting heads, but it’ll be like he’ll say something, and I would be like, “That’s genius!” Or, sometimes he’ll say that my ideas are genius, but it’s not that often.

On filming the music video for “It’s Alright”

SK: And were one of these ideas the bed choreography of “It’s Alright”? How did that come about?

KS: Yeah, that’s another example of Matt being a genius is the “It’s Alright” video. Matt comes up with all of the video ideas — well, most of them.

MJ: We thought we’d learn [the choreography] quick, just a couple two-hour rehearsals. But it was six or seven days of six-hour rehearsals, and then we shot it in one day, which I didn’t think would ever work out.

KS: In this video, there’s definitely a portion that gets real, and Matt got extremely uncomfortable.

MJ: When she says “gets real,” it’s only probably eight seconds of the video, and it was actually my idea to just look up a book of sex moves, and we shot like 30 sexual positions; but by No. 25, and we’re there with a 15-person crew, and we’re in [positions] like Bumper Cars or Ear Muffs or…

KS: Hey, a lot of that crew got laid that night.

MJ: But I knew we just had to get through it. I’m comfortable with myself, but I was turning a little red.

What’s on the horizon for Matt and Kim?

MJ: The touring just doesn’t stop. The next six months or so, a lot of festivals we’re excited about. I just love that there’s the two parts of what we do. We love playing shows and we love touring; and that’s what we were based on before we even made an album — we were touring. But once you’ve been on the road for a long time, you can just sit in one place and make music. It’s just such a different way of life. Then, once you’ve been home, and you’re over it and you want to get out there, then you get to travel again. The two sides really balance each other out.