First Charlie Sheen, then Ashton Kutcher, then even young Angus T. Jones got controversial. Jon Cryer is spilling the beans on what it’s like to be part of the craziness that is Two and a Half Men. 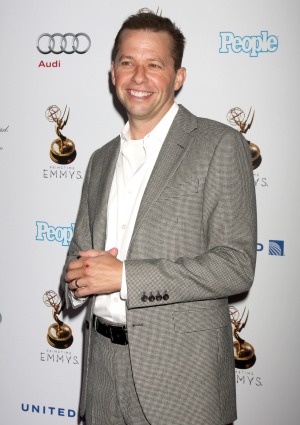 Jon Cryer is probably the most normal, down-to-earth cast member of Two and a Half Men — so it’s no surprise that the crazy controversies caused by his co-stars have left the actor scratching his head.

First there was Charlie Sheen’s notorious breakdown and hate campaign against show creator Chuck Lorre. Then Ashton Kutcher took over in a lead role in the midst of his cheating scandal and split from Demi Moore. Finally, the youngest cast member, Angus T. Jones, found himself in hot water after a religious zealot caught him on video proclaiming the show to be “filth.”

So what does Jon Cryer, seemingly the only normal one of the bunch, think of all this?

“It is surreal to be part of several internet s**t storms,” he told Fox11. “When the latest one happened, Ashton came up to me and he looked like he had seen a ghost and he was like, ‘Did you hear about Angus?’ and I was like, ‘He is OK?’ He said, ‘Sort of,’ and he showed me the video. And as I said, having become a veteran of the internet sh*t storm, afterward I just looked at Ashton and said, ‘Well do you think he still wants to go in on the crew gift?’ It’s just been one after the other.”

“My life has taken a lot of strange turns. Mostly I’m just glad everybody is still alive,” Cryer said. “It is crazy. I have no explanation for it. You could say the show is cursed except the show has been cursed with being monumentally successful so it’s hard to call that a curse. Angus’ one was so minor because I wasn’t actually worried that any actual harm would come to him and he’s already been back to work several times.”

“It was strange to be the object of paparazzi,” he explained. “That was a part of my life that was never an issue before. If I’m at a press event I’m happy to talk to the cameras. When they wait outside my house, then I get mad.”

Controversy and crazy cast-mates aside, Cryer is simply grateful to be part of such a long-running hit.

“It’s a great feeling,” he said. “You cannot fool yourself into thinking you know why this has happened or that you have any idea how to replicate it because it’s never the same. But, absolutely, I am amazed that the show has had such longevity and [I] feel incredibly lucky about it.”