Emma Watson, currently riding a wave of buzz due to her role in director Sofia Coppola’s glam larceny flick The Bling Ring, may be taking on another big-girl role soon. 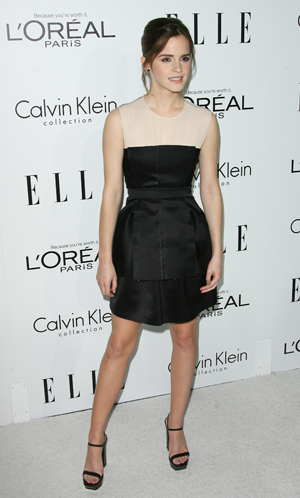 It’s all hearsay for now: The hacker group Anonymous broke into the servers of Germany’s Constantin Films and leaked documents it found there, including one that said Watson is attached to star in Focus Features’ Fifty Shades of Grey film adaptation.

Anonymous boasted about their break-in on Twitter; the studio confirmed to the Hollywood Reporter that it had been hacked, but said the documents were both out of date and not that private, available to many Constantin worker bees.

Regardless, the rumor that Watson was to play Steele has been widely reported; the Anonymous hack just maybe confirms what we kinda-sorta knew already, even though there have been plenty of other 50 Shades casting rumors, including one that Pretty Little Liars star Lucy Hale was chasing after the role, and Ryan Gosling as Christian Grey.

USA Today has it that The Vampire Diaries‘ Ian Somerhalder is the “fan favorite” to play Christian Grey. He appeared on Live with Kelly and Michael Wednesday but wouldn’t fess up to any casting decisions. “There are so many young boys up for this role,” USA Today quotes Somerhalder as saying. “I can’t say anything other than it’s a very interesting story.”

Watson was reportedly up for another high-profile role that she just rejected, that of Cinderella in the live-action remake of the Disney classic directed by Kenneth Branagh. She will not be playing Cinderella, with Cate Blanchett as her evil stepmother, more’s the pity.