The FLOTUS looks predictably stunning on the April cover of Vogue, as elegant and lovely as ever. But if you look closely, something about her face is different. 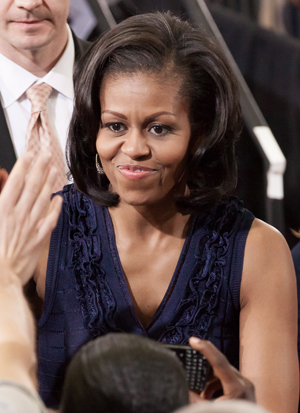 Fuller brows. That’s what Michelle Obama sports on the cover of April’s Vogue, making her look younger and better than ever.

“The ‘angry,’ over-plucked eyebrows that have drawn backlash over the years are now significantly thicker, lower and softer,” writes The Huffington Post.

Mrs. Obama has been criticized for her plucking choices for years, with reporters describing her brows as harsh, severe, and calling out to makeup artist Ingrid Grimes-Miles to put down the tweezers.

In 2008, conservative pundit Bill O’Reilly said that the public perception of Michelle Obama was that she was “angry.” In 2010, the Huffington Post wrote that she looked “like Cruella de Vil’s aesthetician has gotten her hands on her.”

As much praise as Mrs. Obama has garnered over the years for her fashion choices both high (her stunning silver Oscars dress) and low (a $35 H&M dress on Today), that’s how much criticism her brows have drawn.

But now, the brows have been unleashed! The Huffington Post quotes makeup artist and “Eyebrow King” Damone Roberts, who says the FLOTUS “is the perfect example of how fuller brows tend to frame one’s face by softening the features.”

The Huffington Post story theorized that the over-plucked brow look popular over the last several years is on the way out.

What do you think? Is high and arched a thing of the past? Does Michelle Obama look younger with her bangs and softer brows?