All your favorite meatheads flex their muscles in the latest protein product, G.I. Joe: Retaliation, in theaters March 28. These toys are larger than life and don’t play around. 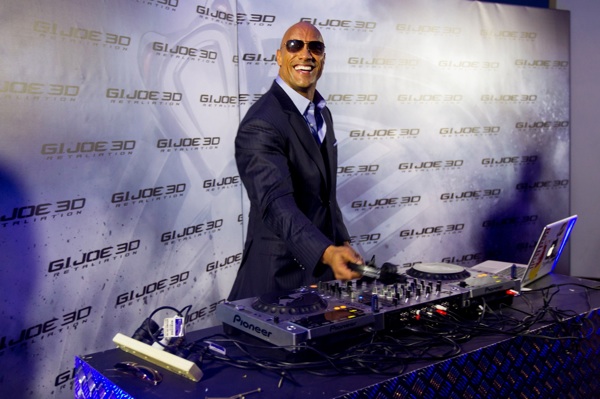 Jay-Z is known everywhere, including in the upcoming action adventure movie G.I. Joe: Retaliation. In this clip, Dwayne Johnson’s character, Roadblock, quotes him and an infamous bedtime prayer for children. There’s something adorable in the irony of a life-size doll/grown man quoting a child’s prayer in the words of Jay-Z. In summary, it’s bascially a rock-a-bye prayer by The Rock. These guys aren’t so scary after all! In this toy story, your favorite musclemen and women come to life in a battle to defend their existence against the evil Zartan and win back their dignity in the eyes of their own government.

Move aside Barbie and Ken: These muscle machines are the ultimate in toned physique and taste in music. Ken might want to cover Barbie’s eyes with the return of the onscreen stripper we all learned to love in Magic Mike, Channing Tatum. Isn’t the saying “If you’ve got it, flaunt it”? You may remember G.I. Joe: Rise of the Cobra back in 2009. However, the cast is definitely a little beefier this time around.

With all the testosterone of Dwayne Johnson, Channing Tatum, Bruce Willis and more, who really keeps these bad good boys in line? Adrienne Palicki as Lady Jaye rides along with these toys and laughs amusedly at Roadblock quoting Jay-Z. Silly boys. I guess they will still be boys even as grown men. Whether she’s laughing at his character or at Dwayne’s bad acting, I guess we’ll never know. (I’m just messing with you Rock! Don’t hurt me!)

I know what you might be thinking. Why is Jay-Z not in this film? Well he’s been busy charming the crowd alongside Justin Timberlake in his new hit “Suit & Tie.” I’m just wondering why they don’t make Jay-Z a G.I. Joe so he can rap about “Suit of Armor.” Maybe his own music will be featured in the movie? Judging by the film credits, there will definitely be a ton of visual effects and stunts to get you amped up at the gym, whether or not you hear Jay-Z’s jams. Just think about looking like a G.I. Joe when you’re pumping iron to get ripped.

See the G.I. Joes larger than life in 3D and IMAX 3D starting March 28. It will be huge!