Have George Clooney and Stacy Keibler called it quits? The breakup murmurs that started heating up after the Oscars have come to a head. 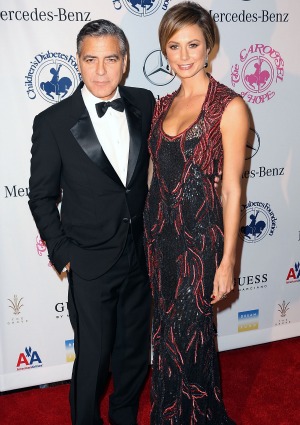 Is eternal bachelor George Clooney on the prowl once again? Rumors started swirling post-Oscars that he and girlfriend of nearly two years Stacy Keibler were on the outs — and now a source says they are definitely dunzo.

The Ides of March actor seems to have a time limit on his lady companions, with the end of awards season as an expiration date. Now Keibler seems to have fallen by the wayside, much like her predecessor, Italian actress Elisabetta Canalis.

So what allegedly broke them up? The usual: She wanted a bigger commitment, he did not. A source told The Sun, “They knew it was never going to end in marriage or babies and Stacy does want kids and a husband in the next few years.”

But it wasn’t a waste for the former pro wrestler. The source says Clooney gifted her an apartment and some killer jewelry as a consolation prize.

The pair seemed happily coupled up as recently as a few weeks ago when they walked the red carpet at the Oscars together and celebrated Clooney’s win as a producer for Argo, even posting a picture of her kissing the statuette to her Instagram account.

At the very least they are physically separated at the moment. Clooney is in Germany filming The Monuments Men with Ocean’s 11 co-star and pal Matt Damon. However, Keibler posted a pic of herself in a private jet on Friday with the simple caption, “Up up and away…” Could she be visiting her love right now?

There has been no confirmation or denial of the split from either camp, and we might not want to hold our breath waiting for one, even if it is true.

“I know there has to be a happy medium being in the public eye. You just have to remember not to give everything to everybody!”