“Can you name the last movie starring Jessica Alba or Kate Bosworth?” asks The Hollywood Reporter. No? So why are they so red-carpet ubiquitous? 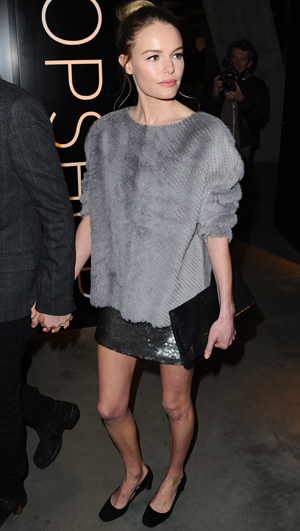 You don’t see them on television or on the big screen, but you catch glimpses of these actresses on the red carpet, in the front row at Fashion Week, photographed arriving for premieres. What are they? “Meet the 2013 version of the model-actress,” says The Hollywood Reporter: the mocktress.

Are these just starlets whose careers didn’t really take off? No, don’t pity them, says The Hollywood Reporter, because they make more off personal appearances then you could imagine.

Jessica Alba and Kate Bosworth each make $100K per public appearance at such events as the opening of the Montblanc store in Beijing, the Topshop/Topman store opening in Los Angeles, or the Audi Aspen holiday party.

Alba alone attended 43 such events in 2012, says THR, while her red carpet cohort Diane Kruger hit 31: “Kruger is becoming better known for being well-dressed than her occasional yet interesting acting choices. No doubt she makes more money that way,” says THR.

Other mocktresses THR calls out: Rachel Bilson, who reportedly makes $150,000 per public appearance, Camilla Belle, who makes $20K to $50K for appearances at events like the Samsung Galaxy Note Launch Event in NYC,  and Twilight actress Ashley Greene, who is “splashed all over Who What Wear-style websites for what she wears about town.”

Don’t make the mistake of thinking that every well-dressed actress is a mocktress, THR cautions. Many stars are paid to promote brands, or have a relationship with a designer, such as Anne Hathaway‘s with Valentino. But stars such as Jennifer Lawrence, Hathaway, Cate Blanchett and Charlize Theron are known more for their acting than what they wear.

There are also used-to-be mocktresses like Mischa Barton and Lindsay Lohan, no longer as popular as they were in the early 2000s, and eclipsed by more up-and-coming stars.