Justin Bieber has had a pretty strange month, but his fans have released a video on YouTube to show him he has their unwavering support. 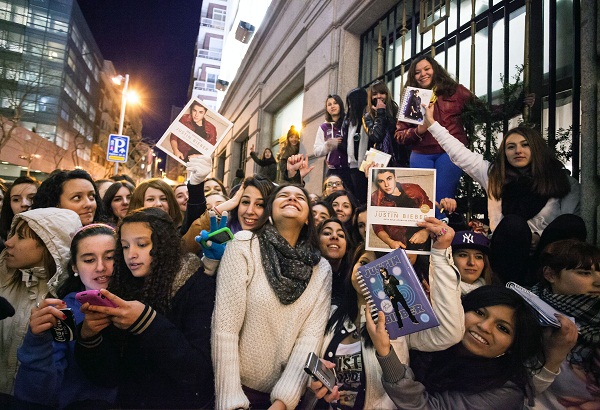 Bieber fans are nothing if not devoted. They will bully people on Twitter or YouTube if someone speaks out against the Biebs. They will, apparently, cut themselves in some strange effort to make sure Bieber gets what he wants. They’ll even wait two hours for the pop singer to show up to a concert. No matter how hard Justin tries to shirk his duties as teen idol, he can’t cast off his fans. Even when (let’s face it), he’s been a bit of a jerk all month: Beliebers continue to stand by their man boy.

Further proof of their devotion is a new video that popped up on BieberArmy’s YouTube channel. The video, titled “Justin Knows The Truth (In His Own Words)”, is a 7-minute long montage of interview clips. All the clips feature Justin talking about two things: How he’s not just another child star cautionary tale and how he has surrounded himself with good people who keep him level-headed.

Um. Really? Where have all these people gone, Justin? Since March began, Justin has acted far from level-headed. First, he was kicked out of a London club for his birthday. Then, he showed up two hours later for a London concert. The next night, Bieber became inexplicably ill on stage, though he felt fine the night before and the nights after. He went on to scuffle with paps before leaving London. And Justin mysteriously canceled a show in Portugal. It got quiet for a couple days… too quiet.

Then: Bam! Biebs released a smoldering rant against the media, chastising us for saying anything to make money and claiming he’s not just another child star and that he’s not going to end up like Lindsay Lohan. He even closed the statement with unacceptably bad judgment by making a jab at Lindsay’s tax statements. He quickly deleted that last part… but not before many people still saw it.

Of people we know Justin hangs out with, we can name at least three that may not be the best influences. First, there’s his buddy Lil’ Twist who constantly borrows Justin’s many fancy cars and then lands himself in need of some roadside assistance. Also, when Justin was kicked out of the club on his birthday, it was apparently his buddy Jaden Smith who was causing all the trouble. Biebs also did studio time with rapper Soulja Boy, who in 2011 put out an anti-military song. Biebs is Canadian so it’s not his army Soulja Boy blasted with an F-bomb… maybe that makes it all better?

Bieber may have a few decent people somewhere in his entourage, but here’s the thing: It takes a village. All we’re saying is: No, Justin, you’ve not surrounded yourself with the best of people. Try again.