Rachel’s not pregnant, but her problems are far from over. Santana tries to convince Rachel that Brody is bad news. while Finn and Mr. Schuester duel it out at McKinley. 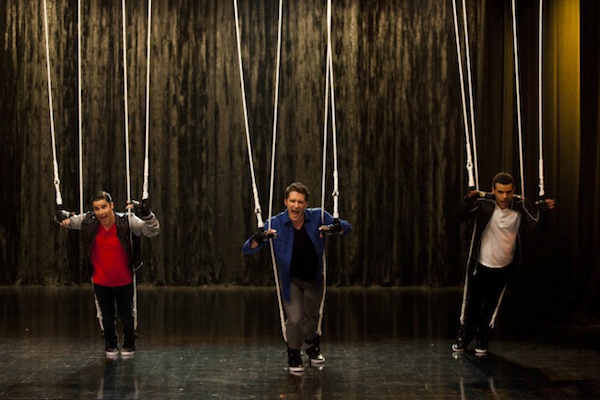 I won’t lie. I’ve been listening to Glee’s version of “How to be a Heartbreaker” all night. It’s ridiculously catchy and the scene in tonight’s episode of Glee was so beautifully choreographed, I can’t get enough.

Song #1: “How to be a Heartbreaker,” originally by Marina and the Diamonds

The context of the song is another story. Brody (Dean Geyer) sings it while at a fancy gathering where it’s revealed that Brody’s definitely not working for a catering company like he told Rachel (Lea Michele). All signs point toward male escort, though Brody has yet to come out and say it.

Missed a few episodes of Glee? Read the recaps >>

Santana uncovered the dirty little secret while doing what she does best: getting in everyone’s business and judging them for it.

She steals Brody’s pager while he’s in the shower, and proceeds to confront him about the side job in arguably the best Glee performance in a long time.

Back at McKinley, Mr. Schuester (Matthew Morrison) is still angry with Finn (Corey Monteith) for kissing Emma. Finn tries to apologize but it doesn’t work. The glee club intervenes and assigns the two a feud song so they can work out their issues.

Turns out, Mr. Schu and Finn aren’t the only ones with unresolved issues at the school.

Unique is angry with Ryder because he kissed Marley. Unique is also upset because Ryder refuses to acknowledge her as a girl.

Song #3: A mashup of Elton John’s “The Bitch is Back” and Madonna’s “Dress You Up”

But even after their feud song, Ryder can’t find a way to relate to Unique and accept her for who she is. It isn’t until he receives some advice from a new girl he met online that he accepts Unique for who she wants to be and apologizes.

Sue channels her inner Nicki Minaj and wins the feud.

But we discover that Blaine meant to lose the battle. Now he can get the inside information on Sue and bring her down.

At the end, Mr. Schu says he wants to forgive Finn but can’t. Finn decides to leave the school for good, and Marley encourages him to get his teaching degree.

In New York, Rachel and Kurt find out about Santana’s confrontation with Brody. They ask Santana to move out. She does but that doesn’t stop her from looking out for the best interests of her friends.

Get a behind-the-scenes look at this season of Glee >>

Santana tricks Brody into admitting his side job by pretending to be a client. Brody pleads with her not to tell Rachel, but Santana has an even bigger move up her sleeve. She brought Finn with her, and he heard the whole thing.

Finn tells Brody to disappear from Rachel’s life and become a ghost. Brody says he loves her. Finn argues she doesn’t even really know who he is. Yet.

Brody grabs Finn and insists he can’t tell Rachel. Finn punches Brody and the two get into a fight. Finn pins him down and tells Brody to “stay away from my future wife.”

At the end of the episode, Ryder is back on his computer talking to his online mystery girl. He tells her he wants to meet her. She goes offline.