Season 13’s The Bachelor Jason Mesnick and his wife, Molly Mesnick, welcomed their first baby, a daughter named Riley Anne Mesnick. Read on to hear about the Mesnicks’ first moments with baby Riley. 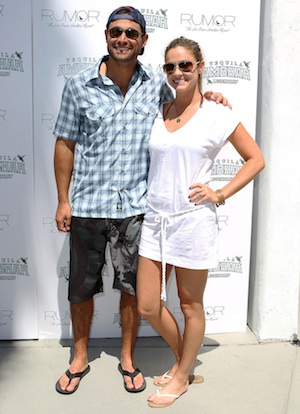 The Bachelor Jason Mesnick and his wife Molly Mesnick welcomed a baby girl Thursday in Seattle. The celebrity couple spoke exclusively to People magazine about their first moments with their new daughter, Riley.

The Bachelor: Why we’re in mourning >>

Jason Mesnick said Riley “has a head full of hair, probably more than I’ll have in the next few years.” People reports the baby weighs 6 lbs. 8 oz. “What’s amazing to me is when Molly is holding Riley, her eyes do not come off her,” said Jason. “I’m already seeing how much Molly loves the baby.”

Who will be the next Bachelorette? >>

Molly went into labor around 2 a.m. on Thursday. She woke up Jason after being in labor for about an hour and half; Jason said he massaged Molly’s feet between her ankle and her Achilles — a trick from his friend — that might have put her in labor. “I did it last night for about 3 minutes and Molly woke me up about 3 this morning, after she’d been up for about an hour and a half, so maybe it does work?”

Jason Mesnick, 36, has one son from his previous marriage — Ty, who is 8 years old. This is Molly Resnick’s first child. “Ty has been asking for a sibling for so long,” Jason said. “He was here earlier holding her and kissing her and it was really, really cute. We’re so happy.”

Which Bachelor wants to wait a couple of years for kids? >>

The couple thanked their fans who congratulated them on their baby news via Twitter. “We welcomed the most beautiful healthy baby girl to our family today Riley Ann Mesnick. Thank you for all your well wishes! @MollyMesnick” tweeted Jason.