The Guardians of the Galaxy roster is growing. Marvel’s upcoming superhero team just landed another star. Wrestler-turned-actor Dave Bautista has joined the cast of the blockbuster. 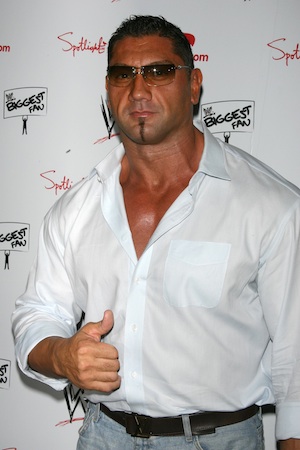 Marvel Studios has cast its second lead for Guardians of the Galaxy. The film’s only confirmed star was Chris Pratt (Parks and Recreation, Zero Dark Thirty), but now he’s got a partner.

According to The Hollywood Reporter, WWE wrestler and mixed martial artist Dave Bautista has signed on. The beefy actor will play the role of Drax the Destroyer.

Bautista had stiff competition for the part. Aside from Isaiah Mustafa and Patrick Wade, Game of Thrones’ Jason Momoa was gunning for the role. Momoa was rumored to be Marvel’s top choice, but a deal never came to fruition.

According to the film’s synopsis, “Galaxy centers on Peter Quill/Star-Lord (Pratt), a U.S. pilot who ends up in space in the middle of a universal conflict and goes on the run with futuristic ex-cons who have something everyone wants.”

Bautista’s Drax the Destroyer is a superhuman warrior set on killing Thanos. If you saw The Avengers (what? you didn’t?), Thanos was the villain who briefly appeared during the end credits.

We have two Guardians down with three more to go. The rest of the team includes Groot, Gamora and Rocket Raccoon. Those roles have yet to be cast.

Guardians of the Galaxy will be directed by James Gunn and hits theaters Aug. 1, 2014.