The Veronica Mars movie fundraising campaign has made big waves — big enough to have (at least briefly) eclipsed the news of Pope Francis’ new position! Not one to be rude, Kristen Bell tweeted an apology Thursday. 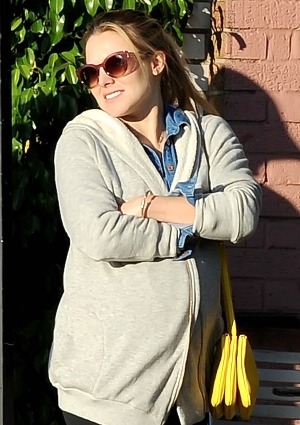 Kristen Bell and the entire Veronica Mars team have been on a wild ride the past 24 hours. In a single day, their Kickstarter fundraising campaign topped its goal of $2 million — and the donations are still rolling in!

“I love you guys. You are all SO spectacular. I am speechless, ” the mom-to-be, seen here in full bloom in late January, tweeted to fans as it became clear that throngs of people want to make a Veronica Mars movie just as much as she does.

Dax Shepard, due to become a father nearly any day now, also shared his gratitude, writing, “To everyone who helped my most beautiful, nerdy angel (@IMKristenBELL) today, THANK YOU!!!”

Thank-you messages aside, Kristen Bell went on to offer an apology for all the waves her movie news has been making. Late Wednesday she tweeted, “Dear pope: Im sorry VM fans stole ur thunder on ur 1st day. I mean,Im not really that sorry,but i thought it would be polite 2 say so. xo”

Day 2 of The Veronica Mars Movie Project campaign continues to go swimmingly. As this post goes up, those desperate to see the former CW television show get a rebirth have donated  $3 million!

Looks like the 32-year-old won’t have a long maternity leave. Though Kristen Bell’s due date hasn’t been officially revealed, baby’s arrival (complete with whiskey and drugs for the birth) is rumored to be expected in late spring. Now that the Veronica Mars movie campaign funds are overflowing, filming is set to begin this summer, with the movie’s release date sometime in early 2014.

What do you think of the Veronica Mars team’s approach to funding their film?