Kirsten Dunst and Jim Sturgess, the stars of the sci-fi romance movie Upside Down, tell us what it was like playing star-crossed lovers in a parallel universe. 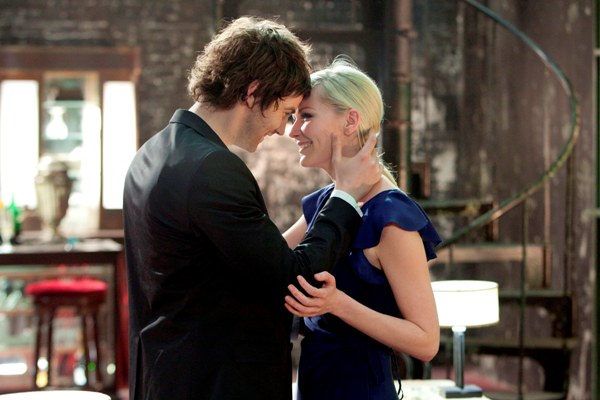 Who knew Kirsten Dunst was such a sucker for love stories?

In the science-fiction-meets-fairy-tale love story Upside Down, Dunst plays a wealthy “upper-world” girl who falls in love with a poor but smart boy (Jim Sturgess) on a planet below. The two planets run parallel but opposite to each other — in other words, upside down.

With two different gravitational pulls, the people on each planet can see each other and interact but cannot go back and forth between the two planets. Not only is such travel impossible, but it is also illegal for the impoverished inhabitants of the lower planet to mingle with the people of the upper planet.

By a stroke of fate, though, Adam (Sturgess) and Eden (Dunst) meet and fall in love. Adam then spends the rest of his life trying to find a way for the two to be together.

“It was such a different story than I had ever read before,” Dunst told SheKnows. “I thought, ‘This could be a very special film.’ What else in this world is there but love?”

Good question, Kirsten! Perhaps it’s the fact that she and beau Garrett Hedlund just returned from the romantic city of Paris that has her feeling so amorous.

But Sturgess agreed and said he is also sucker for sentiment.

“I like the way it felt like a fairy tale,” said the actor. “You can make films about relationships and the complexities of relationships, but then it’s nice to tell a story just about true love and love at first sight and all those magical things that you need to have.”

See what else they had to say about the multidimensional film and director Juan Diego Solanas in our video interview with the actors. Then be sure to catch Upside Down in theaters today!

Watch our chat with Kirsten and Jim