Charlie Sheen takes to Twitter yet again to rant and rave about his daughter’s former school and how she was a victim of bullying. 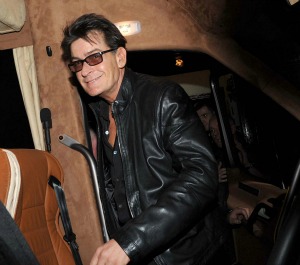 Charlie Sheen is making Twitter headlines again for his rant against his daughter’s former school after she was a victim of bullying. His choice of retaliation? Well, let’s just say it’s a little juvenile.

Sheen tweeted on Wednesday night, “If you have a rotten egg, a roll of toilet paper or some dog s**t, I urge you to deliver it with ‘extreme prejudice’ to the campus run by trolls and charlatans. Make me proud.”

He continued with, “And if you’re feeling the ‘show and tell’ of it all, smear the s**t to spell one name on the front door: VICTORIA.”

According to TMZ, Victoria is reportedly the name of the student who was victimizing his 9-year-old daughter, Sam. The challenging part to this story, outside of the threatening rant, is the fact that this event happened back in 2012. Sam has not been enrolled in the Viewpoint School since May of last year.

The bully supposedly teased Sheen and Denise Richards‘ daughter about everything from her hair, her looks and her father’s ousting from Two and a Half Men. Even though Sam’s family intervened three times in meetings with school officials, the issue was never resolved.

Apparently Victoria’s parents believed their daughter and accused Sam of lying about the teasing. Sheen and Richards pulled their daughter out of school in March and she officially withdrew as a student in May.

It’s unknown why the Anger Management actor chose to air his family’s dirty laundry months later, but the Viewpoint School responded to the Sheen threats on their Facebook page.

The school wrote, “Viewpoint School’s highest priority is the safety, security and education of our students.”

While school officials did say, “Our School takes accusations of bullying very seriously,” they failed to address what steps they took to ensure Sam’s safety and well-being. It’s clear that Sheen felt they didn’t take the proper measures.

TMZ is reporting that the school is taking no risks and that extra security has been called in to protect the students from any potential harm and the media onslaught.

Viewpoint School is located in Calabasas, California, a suburb of Los Angeles, where tuition fees for the current school year total over $26,000.