Millennial feminist Lena Dunham sat down with Playboy magazine for their April 20Q column and it’s annoying, refreshing and ironic. 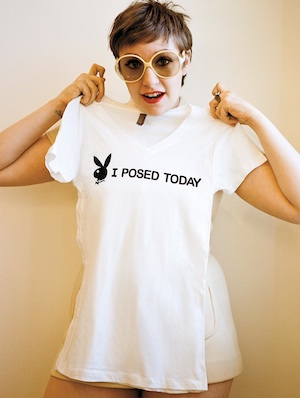 Lena Dunham and Playboy. Not exactly a predictable combination but then again, fortune-telling is always a difficult practice.

Playboy nabbed Dunham for a fascinating interview that delves into the mind of the young creator of HBO’s Girls in a way that’s just as annoying as it is refreshing. It’s a very conflicted spot.

Top 8 moments from this week’s Girls >>

While the interview is captivating in the familiar way that Dunham dissects her perspective on what’s wrong with Hollywood, the irony of her chatting with Playboy is somehow lost. And of course, she tells Playboy how she doesn’t aim to match the sultry, oversexed version of beauty they — and others like them — feature each month.

Lena Dunham represent herself very well but it’s the idea that she represents a generation of women that is bothersome. A generation that seems to exclude experiences outside of the liberal, middle-to-upper class educated environment. If Girls is Dunham’s tribute to just her own experiences, that’s fine. Many women, the author of this article included, can identify with HBO’s hit show. Dunham just needs to take ownership that Girls and her world view is narrow.

Asks Playboy, “How do you want Girls to contribute to the ongoing conversation about feminism?” To which Lena Dunham responds in a typical Hannah Horvath way:

“On Girls I like being a mouthpiece for the issues I think young females face today. It’s always shocking when people question whether it’s a feminist show. How could a show about women exploring women not be? Feminism isn’t a dirty word. It’s not like we’re a deranged group who think women should take over the planet, raise our young on our own, and eliminate men from the picture. Feminism is about women having all the rights that men have.”

An open letter to Lena Dunham about Girls >>

And don’t think for a minute — if you ever did — that Lena Dunham craves that enviable Victoria’s Secret body. Hey, it’s society’s standards of beauty that make those VS models enviable anyway. Dunham’s not fooled.

“I don’t think I’d like it very much,” she says of the thought of her magically waking up with the body of a Victoria’s Secret model. “There would be all kinds of challenges to deal with that I don’t have to deal with now. I don’t want to go through life wondering if people are talking to me because I have a big rack.”

You can read the full interview with Lena Dunham in Playboy‘s April issue which is available in print on Friday.